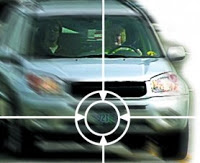 from portland tribune: Portland police are testing a high-tech camera system that rivals anything in a science fiction movie.

It can reach back in time and track your movements across the city — and even produce photos of your previous locations.

But — while some are raising Big Brother civil liberties questions about the concept — the police promise they will only use it to solve crimes, like finding stolen cars or locating wanted criminals.

The system features a series of cameras that mount on patrol cars that automatically read and photograph the license plates of all passing vehicles — including those parked along the sides of the streets. Plates of stolen and suspect-linked vehicles trigger an alarm, allowing the officers to immediately locate them.

The camera also is hooked into a computer that records the exact time and location where each plate was photographed, allowing the police to later map its previous locations around town.

The test car only has been equipped with the system for a few weeks. But Colbert already has recovered seven stolen cars it identified.

Colbert believes the “data-mining” ability of the system has the potential to be even more important to the police, however.

“If a detective identifies a suspect and links him to a car, we can then go back and find out where the car has been,” Colbert said. “Or we can find out what cars were near a location where a crime was committed and where they went after that.”