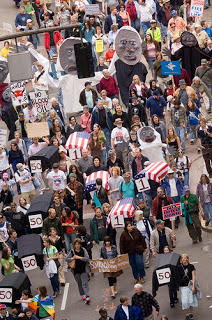 from oregonian: The crowd at today's anti-war demonstration easily numbered in the thousands.

Organizers said there might have been as many as 15,000 people who participated in the march. Police did not give an estimate.

Two informal head counts by The Oregonian as protestors passed Southwest Broadway and Madison Street put the number between 10,000 and 13,000.

The march was mostly peaceful. But Portland police say they arrested three people during a confrontation with what they are calling "a small fringe group" after this afternoon's anti-war demonstration in downtown Portland. A police spokeswoman said they used pepper spray to help control the group, which she said was trying to block traffic near Southwest Park and Morrison.

Other sporadic protests and skirmishes persisted after the march in different parts of the city.

the oregonian has a surprising amount of photos & videos from the days events located here...