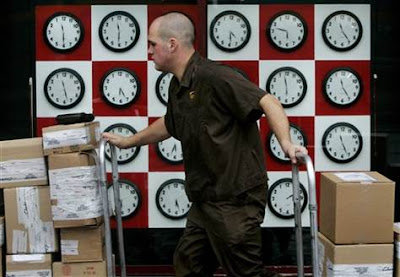 from ap: A yearlong experiment with America's electric grid could mess up traffic lights, security systems and some computers — and make plug-in clocks and appliances like programmable coffeemakers run up to 20 minutes fast. "A lot of people are going to have things break and they're not going to know why," said Demetrios Matsakis, head of the time service department at the U.S. Naval Observatory, one of two official timekeeping agencies in the federal government. Since 1930, electric clocks have kept time based on the rate of the electrical current that powers them. If the current slips off its usual rate, clocks run a little fast or slow. Power companies now take steps to correct it and keep the frequency of the current — and the time — as precise as possible. The group that oversees the U.S. power grid is proposing an experiment that would allow more frequency variation than it does now without corrections, according to a company presentation obtained by The Associated Press. Officials say they want to try this to make the power supply more reliable, save money and reduce what may be needless efforts. The test is tentatively set to start in mid-July, but that could change. Tweaking the power grid's frequency is expensive and takes a lot of effort, said Joe McClelland, head of electric reliability for the Federal Energy Regulatory Commission. "Is anyone using the grid to keep track of time?" McClelland said. "Let's see if anyone complains if we eliminate it."