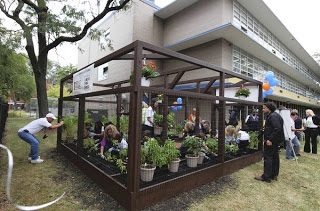 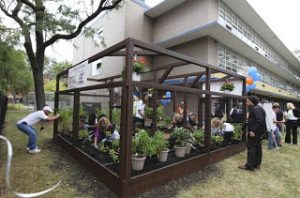 But one thing the more than 40 gardens have in common is that none of the produce ever finds its way into CPS lunchrooms. Instead, because of rules set by the district and its meal provider, the food is sold or given away.

The policies are in place despite the high obesity rate among Illinois children and experts' concerns that young people are eating few fresh vegetables. Meanwhile, studies suggest children eat and accept vegetables much more readily when they have helped grow them.

But in a district that touts its use of some local produce in the lunchroom, the most local of all remains forbidden fruit.

Kathleen Merrigan, deputy secretary of agriculture at the U.S. Department of Agriculture, recently toured a CPS school garden at the Academy for Global Citizenship on the Southwest Side. There, two second-grade girls showed her the eggplant, squash and tomatoes they grew, along with the chickens they kept for eggs.

"Ideally, all of those products would make it from the garden to the lunchroom," Merrigan said.

But rules created by CPS and its meals supplier, Chartwells-Thompson, prevent that from happening.