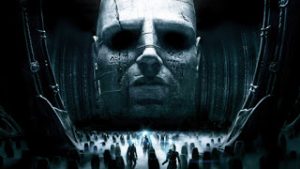 Vigilant Citizen (VC) views producer Ridley Scott’s movie “‘Prometheus’: A Movie About Alien Nephilim and Esoteric Enlightenment,” as a metaphor for spiritual enlightenment, more specifically, esoteric Illuminati enlightenment. Prometheus, the giver of fire to mankind, is not only movie’s title, but also, the name for the mission’s ship sent to find the alien’s planet.

VC deconstructs movie in detail to illustrate backdrop to human history, where aliens with superior abilities first bestowed original “mother culture” upon humanity. A first scene in the movie has an Engineer drinking a liquid, who then dissolves after falling into water, evidently, seeding environment – the Earth with his DNA. The Engineers of humanity are discovered to be also its progenitors as their DNA is a match to the human genome.

VC explains the “Ancient Astronauts” theory, a lynchpin of movie, who the Watchers (Engineers) were and the Nephilim, their offspring from unions with human women. A spiritual dilemma is pervasive throughout movie.

The present writer suspects Prometheus serves to undermine Christianity, a first assault that suggests Jesus was an alien, thus, promoting a tainted “alien gospel” in place of the original! A previous post is also available, “Prometheus: A Lesson In Illuminati Religion.”