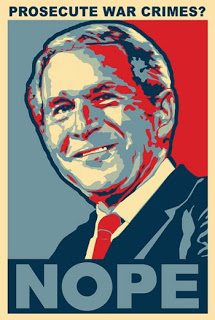 from threat level: The Obama administration on Thursday released top secret memos outlining the legal rationale used to justify the CIA's torture of terror suspects, but vowed not to prosecute the torturers. "It would be unfair to prosecute dedicated men and women working to protect America for conduct that was sanctioned in advance by the Justice Department," Attorney General Eric Holder said. Thursday's internal memos were released, after intense internal debate, as part of a Freedom of Information Act lawsuit brought by the American Civil Liberties Union during the Bush administration. Obama's release of the memos is a commendable act of transparency. At the same time, though, Justice Department lawyers are defending the previous administration's top officials accused in federal court of authorizing and carrying out torture and other abuses. Threat Level examined that issue in February. On Thursday, the administration extended its protection even further, and said it would defend, at taxpayer expense, other government officials or employees who find themselves before a congressional inquiry, in any court, federal tribunal or in "any proceeding" if they relied on the memos as a legal basis for their conduct.

conduct which includes things like this:
bush administration authorized use of insects in interrogations
from raw story: The Bush Administration Office of Legal Counsel authorized the Central Intelligence Agency to put insects inside a confinement box as part of the Administration's "harsh interrogation" practice, as well as throwing detainees into walls, according to memos released by President Barack Obama on Thursday. Read the full memos here.