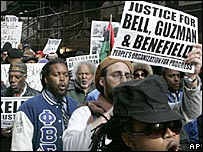 from raw story: In the following video report filed by the Associated Press, protesters fill Wall Street in a third demonstration against alleged brutality by the New York Police Department.

from bbc: A group of several hundred protesters took to New York's Wall Street on Thursday as anger over the fatal police shooting of a young black man increases.

The mostly African-American demonstrators, many of whom accused New York's top politicians and police of institutionalised racism, appeared outnumbered by a large assortment of police officers. Despite moments of tension, the event passed off without any violent confrontation.

Sean Bell, a 22-year-old father of two, was killed in the small hours of what was supposed to be his wedding day, at the end of November.

Nobody disputes that 50 police bullets were fired by five plainclothes officers at the car Mr Bell was driving, wounding two passengers who had been celebrating with their friend in a strip club in the borough of Queens hours.

None of the men were armed, but some police officers have said they had reason to believe otherwise.

The majority of officers at the scene were black, but one white officer was responsible for firing 31 of the bullets discharged.