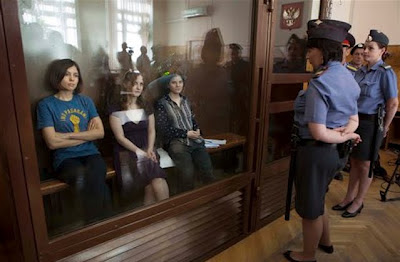 from wikipedia.org: Pussy Riot is a Russian feminist punk-rock band based in Moscow. Founded in August 2011, the band stages politically provocative performances about Russian political life in unusual locations, such as Lobnoye Mesto on Red Square, on top of a trolleybus or on a scaffold in the Moscow Metro.

On February 21, 2012, five members[1] of the group staged a performance on the soleas of Moscow’s Cathedral of Christ the Saviour, motivated by their opposition to the Russian President Vladimir Putin and the politics of the Russian Orthodox Church.[2][3] Their actions were stopped by church security officials. On March 3, after a video of the performance appeared online, three of the group members were arrested and charged with hooliganism.[4]

Their trial began in late July and raised much controversy in Russia and globally. According to a poll by the Levada Center, 44% of Russians supported the trial and believed in its fairness, while 17% did not.[5] At the same time, the band members gained some noticeable support in Russia and internationally because of allegations of harsh treatment while in custody and the risk of a possible seven-year jail sentence.[6][7]

On August 17, 2012, the three members were convicted of hooliganism motivated by religious hatred (Article 213.2 of the Criminal Code) and each sentenced to two years imprisonment.[8][9] The Russian Orthodox Church issued a statement appealing to the authorities to show clemency, within the framework of the law.[10][11] The trial and conviction have attracted international criticism.[12] The foreign ministries of Germany and Sweden, together with representatives of the European Union and the United States, called the sentence “disproportionate”.[13]