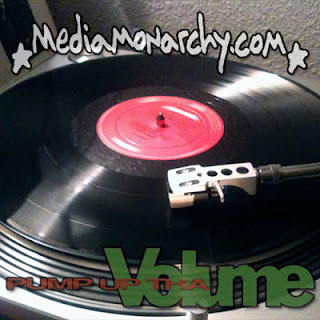 Holy Ghost!
"Okay"
'Dynamics'
DFA, 2013
Note: We begin this week with a much shorter song from last week's second played band, Holy Ghost!. "Does Dynamics make you dance?” To put it simply, yes. If nothing else, the Brooklyn duo keeps feet shuffling, arms flailing, and (insert however you like to move here) for the entirety of their second album, from the opening phantom bloops of “Okay” all the way to the last synth echo of “Cheap Shots”."
(More Info)

Of Montreal
"She Ain't Speakin' Now"
'Lousy With Sylvianbriar'
Polyvinyl, 2013
Note: "Authentic musical swagger sounds effortless and the more you try to fake it, the more likely you are to alienate your audience... Once you’re Letterman big, things change fast and in the case of many an unlikely success story, usually not for the better... Lousy With Sylvianbriar mostly exonerates of Montreal for their recent missteps. It’s a refreshing return to the stripped down folky pop of their debut, Cherry Peel and 2002’s Aldhils Arboreteum."
(More Info)

Porcelain Raft
"Cluster"
'Permanent Signal'
Secretly Canadian, 2013
Note: "Porcelain Raft’s sole member Mauro Remiddi’s take on indie-tinged electro pop embodies both the vibe-heavy aesthetic of chillwave and a post-millenium enthusiasm for pop sensibility. In his youth, Remiddi played music in his native Italy, eventually becoming a film and media composer. In 2000, he moved to New York... Despite its heavily atmospheric production, “Cluster” is a testament to Remiddi’s strengths as a composer."
(More Info)

Johnny Flynn
"The Lady Is Risen"
'Country Mile'
Transgressive, 2013
Note: "When one thinks of the West London folk scene, images of Mumford & Sons and Laura Marling immediately spring to mind. But Johnny Flynn is one of a number of UK-based troubadours who have been contributing to the English-fronted Americana revival since the late-00s."
(More Info)

Evil Eyes
"Shake the Dust"
'Borderlines'
self-released, 2013
Note: "In 2011, long time friends Greg Mabry and Joe Frabotta made the bold decision to leave their hometown of Nashville and follow their dream to San Francisco... The opening track, “Shake the Dust” really sets the tone for this young quartet’s promising future. The song has a glittery yet rustic feel that makes Evil Eyes seem like the beautiful lovechild of Fleetwood Mac and The Shins. Whispered vocals and wistful guitar leads take the listener on a dreamy and uplifting four minute journey. Like the lyrics suggest, sometimes you’ve just got to “shake the dust” and move on."
(More Info)

Tristen
"No One's Gonna Know"
'Caves'
PUPsnake, 2013
Note: Two weeks ago we heard "Goldstar" from Tristen, now she gets into my head with this one. "Single-named singer-songwriter Tristen dug into Nashville's roots with her 2011 debut Charlatans at the Garden Gate, but the Chicago-reared tunesmith wanted to veer in a different direction with her follow-up... Enter C A V E S, an 11-track full-length that recasts Tristen as a synth-pop siren. Due October 15 via her very own PUPsnake Records, the upcoming effort nods to the Eurythmics ("Catalyst"), Kate Bush ("Winter Night"), and, in spirit, Henry Rollins (Tristen credits the former Black Flag leader as the inspiration behind "Forgiveness")." I'm pretty much obsessed with this song now... AND it was produced by Stephen Hague, known for "producing the hits "West End Girls", "True Faith", "Regret", "Star" and "A Little Respect." He was responsible for the biggest success Siouxsie and the Banshees had in the US with the single Kiss Them For Me."
(More Info)

London Grammar
"Strong"
'If You Wait'
Metal & Dust/Columbia, 2013
Note: "London Grammar, an enigmatic trio based out of the UK, are undeniably blessed to have a lead vocalist like Hannah Reid. Her voice — cut from the same cloth of Bat For Lashes’ Natasha Khan and Beach House‘s Victoria Legrand — has a timeless, tranquil quality that immediately silences everything around it... This fourth single of theirs is off of their debut album, which...is shaping up to be one of the most fully-formed debuts since the xx blindsided just about everyone."
(More Info)

Volcano Choir
"Byegone"
'Repave'
Jagjaguar, 2013
Note: We last heard this Justin Vernon side project on Episode072. "Almost immediately you’ll notice that “Byegone” isn’t exactly a world apart from the lush, sonic beauty Bon Iver made for all of us with their latest album back in 2011. This is of course great news for Bon Iver‘s many, many fans. A rose by any other name, and all that."
(More Info)

Califone
"Frosted Tips"
'Stitches'
Dead Oceans, 2013
Note: "Earlier this summer, it was announced that roots-rock experimentalists Califone would release Stitches, their first full-length in four years, in September. When we reported the details, Tom wrote, “Shout out to any band willing to release a song called ‘Frosted Tips’ in 2013.” Well, “Frosted Tips” is here and it’s a swampy, sample-tinged rocker, way cooler than that hairstyle, but perfectly timed with the rumored *NSYNC reunion this Sunday. Get into it below."
(More Info)

Okkervil River
"It Was My Season"
'The Silver Gymnasium'
ATO, 2013
Note: "Named after a short story by Russian Tatyana Tolstaya, Austin’s Okkervil River craft intricate narratives across their highly-literary folk rock... Vibrant and nuanced, “It Was My Season”, as well as The Silver Gymnasium as a whole, is another well-crafted chapter of Okkervil River’s ever-growing songbook, and a testament to Sheff’s ability to continue to mine past myths to create stories that are far more interesting than the events themselves."
(More Info)

Strange Names
"Potential Wives" (Information Society remix)
self-released, 2013
Note: Wow, a year and a half after their original appearance on PUTV, the MPLS/NYC duo return with a Spindle exclusive remix of that same song! Spindle says, "they’ve been named one of the Twin Cities’ Best New Bands of 2012 by City Pages and are in the process of recording a full length album. Their 80s inspired sound is reminiscent of Information Society, so it’s no wonder that Robb decided to get involved with this remix."
(More Info)

Secretary
"Words"
'Secretary'
self-released, 2013
Note: Our Pacific Northwest closer is made up of California transplants and Seattle natives"“Words” from the beginning is a mellow, eclectic production. It begins with a simple beat and it builds and builds ever so slightly with dreamy guitar strums... It’s clear that Secretary understands a kind of mystery ad writes their music around it. It’s enticing."
(More Info)

****************************************
@PumpUpThaVolume Music News:
@recordstoreday: "#LadiesAndGentlemenWeAreFloatingInSpace" by #Spiritualized @officialSpzd - #RSDfloats
“@BuzzFeed: 11 Isolated Vocals That Will Give You Goosebumps” w/ #TheSmiths "ThisCharmingMan" & @QueenWillRock
SPIN's October cover stars @Haimtheband are officially bigger than Justin Timberlake (in Britain)
"If anyone gets in my way, I'm going to get them out of my way," says Fiona Apple on a recent heckling incident
Our covers ep came out today on @noisetrade! Check out our cover of Black Rebel Motorcycle Club
Who wants to go to #ACLFest this weekend in Austin, TX? RT & follow for a chance to win a pair of tix! #ACLFestBB
Is she dropping a new album soon? @thedailyswarm: Annie Lennox Latest to Warn of Flagrant Pop Music Prostitution
'CBGB' Movie Has a Bunch of Old Punks Arguing Like Teenagers...
David Bowie named top selling artist in 2013 so far in independent record stores
RZA working on an album with Interpol's Paul Banks
@HarMarSuperstar We stopped in Ogden last week! Gonna do my best to catch you at Dante's tonight...
Stream @tristentristen's synth-lined 'C A V E S'
Beastie Boys Ad-Rock owns a mini-van and wants you kids to get off his lawn
#NotTheOnion: “@billboard: Jonas Brothers Cancel Tour Citing 'Creative Differences'
Head count: what venue are you at? @holocene @bunkbar @DantesLive @StarTheaterPDX @MississippiStud @DougFirLounge #pdx
@elevenpdx I WISH I was at @DantesLive listening to @HarMarSuperstar sing #LadyYouShotMe...
“@PumpUpThaVolume: @elevenpdx I WISH I was at @DantesLive listening to @HarMarSuperstar sing #LadyYouShotMe...” There's still time!
@TheeQuasi - Full Performance (Live @KEXP)
@dessadarling "Call Off Your Ghost" snuck up on me today and hit me where it hurts...
"I do everything I can to break media" -- Kanye West
MT “@albumstreamscom: So far so good: New album streams by The Avett Brothers, Morcheeba, Electric Six, @Battleme”
@nineinchnails & Queens Of The Stone Age (@qotsa) confirm a co-headlining tour Down Under
D-Day: @TravisMorrison dissects @theDPlan's return
Rapper @DazDillinger Wants #GTAV Recall Over Stolen Songs … @RockstarGames allegedly added tracks after artist declined
This Charming Ron: 'Parks and Recreation' drops Morrissey, Smiths knowledge