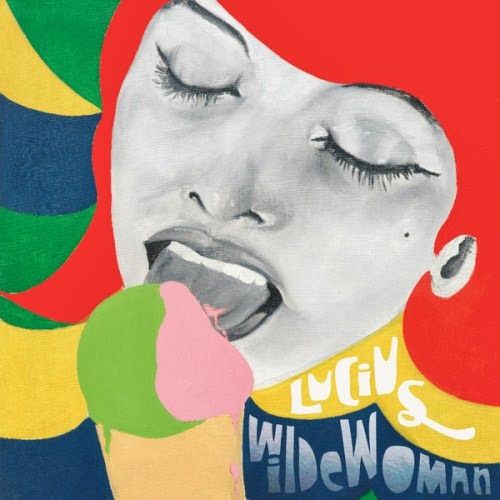 @PumpUpThaVolume: Episode095 – Turn It Around

Angelique Kidjo
"Kulumbu" (w/ Dr John)
'Eve'
SLG, 2014
Note: We begin a new PUTV with not one - but two - living legends. "Angélique Kidjo, the songwriter and singer from Benin, was in Kenya being a do-gooder when the concept of her new album, “Eve,” came to her, she said, “like a light bulb blowing up in your head.”... Along with the “Eve” album, Ms. Kidjo has just released her autobiography, “Spirit Rising: My Life, My Music” (HarperCollins), which traces the story of the determined woman with the potent voice who emerged from the small town of Ouidah, on the coast of Benin in West Africa, where her family’s ancestral home still stands. From there, she went on to reach an international audience, win a Grammy Award and stand alongside world leaders as a voice of Africa." Her eleventh album is "expected" to drop this week.
(More Info)

Milagres
"Jeweled Cave"
'Violent Light'
Kill Rock Stars, 2014
Note: We heard "The Letterbomb", the first listen from the Brooklyn band's forthcoming sophomore long-player on KRS, a few weeks ago - now let's have even more! "Brooklyn-based progressive-types Milagres have announced details of their new album, a record that's a big 'fuck you' to dying apparently, because it's all about frontman Kyle Wilson's recent dance with death. He spent a few months in a hospital bed following a climbing accident, and he came out fighting."
(More Info)

Mutual Benefit
"Golden Wake"
'Love’s Crushing Diamond'
Other Music, 2013
Note: "Written in St. Louis, recorded in Austin, and released in Boston, the now Brooklyn-based musician Jordan Lee records baroque folk music that embraces both melancholic and joyous tones in its crystalline arrangements... “Golden Wake”, the album’s second track, finds Lee meditating in the early hours of the day, reflecting with the regret of times pas before opting for the promise of a new day."
(More Info)

Damien Jurado
"Silver Donna"
'Brothers and Sisters of the Eternal Son'
Secretly Canadian, 2014
Note: Holy crap, it's even MORE new music from Damien! We heard "Silver Timothy" back on Episode086 and now here's another member of the family, "Silver Donna". "Since last October, Secretly Canadian has been promoting Damien Jurado‘s new album... A united cast of characters emerges in the second half of the album. Perhaps they are the Silver family. “Silver Donna” is emblematic of Jurado and Swift’s growing focus on rhythm. In some places, Brothers and Sisters of the Eternal Son is downright groovy, and a long section of “Silver Donna” plays like a congregation being revived, clapping in unison to the beat."
(More Info)

Tamikrest
"Achaka Achail Aynaian Daghchilan"
'Chatma'
Glitterbeat, 2013
Note: "“A desert hosts us, a language unites us, a culture binds us.” That’s the mantra of the Tuareg musical collective Tamikrest, whose mixture of Western and African music was first created in response to a wave of riots in Mali in 2006... “Achaka Achail Aynaian Daghchilan” is a slow, meditative song, carried by crisp acoustic guitars and well-timed strikes of electric guitar chords that create a growing tension throughout the song."
(More Info)

Nick Waterhouse
"This Is A Game"
'Holly'
Innovative Leisure, 2014
Note: We heard from Mr. Waterhouse waay back on Episodes003/011! "The violent saxophone that opens "This Is a Game" serves one purpose – to let you know that Nick Waterhouse is a soul man, through and through. Waterhouse paid his dues as a teenager in the Orange County garage rock scene, opening for modern psych mainstays Ty Segall, Mikal Cronin and the Growlers. After a stint spinning classic R&B wax on the San Francisco soul scene, he moved back down south to record his debut album, Time's All Gone. He's about to release his second album, Holly, which underscores his dedication to the stylings of Sam Cooke, Sam and Dave and Solomon Burke. "'This Is a Game' seems good for dancing to, has got a real good syncopation going, and I like singing the word 'visions,'" Waterhouse told Rolling Stone. "I wrote it in a dressing room in Rennes, France after months promoting my last record.""
(More Info)

Angel Olsen
"Forgiven/Forgotten"
'Burn Your Fire For No Witness'
Jagjaguwar, 2012
Note: "When Chicago singer/songwriter Angel Olsen announced her upcoming album Burn Your Fire For No Witness last month, it was accompanied by lead single “Forgiven/Forgotten,” which Tom noted was “a juiced-up two-minute rock song that’s about 1000% more muscular than anything on Half Way Home,” Olsen’s skeletal 2012 breakthrough. Now that song has a video by director Zia Anger, and it features Olsen hugging it out with her love interest and cracking a smile on various solo walks and bike rides. It’s a simple and effective visual for a simple and effective song, and you can watch it below."
(More Info)

Cibo Matto
"10th Floor Ghost Girl"
'Hotel Valentine'
Chimera, 2014
Note: "This third album from the creative, genre-hopping New York-based duo comprising Miho Hatori and Yuka Honda is their first in 15 years, following career diversions that have seen them individually collaborate with artists such as Gorillaz and Plastic Ono Band. Produced by Honda, who has previously helped create the sonic palette for numerous albums from Sean Lennon's 1998 Into the Sun to Martha Wainwright's 2012 Come Home to Mama, Hotel Valentine has been described as a concept album about the haunted hotel of the title and takes influence from hip-hop as much as it does from indie pop." We wonder if this song was inspired by Elisa Lam.
(More Info)

Scott H. Biram
"When I Die"
'Nothin’ But Blood'
Bloodshot, 2014
Note: The self-proclaimed "Dirty Old One Man Band from Texas" brings the grit! "On February 4, Austin country-metal-punk rock ‘n’ roller one-man-band blues man Scott H. Biram‘s back with a new record called Nothin’ But Blood. It’s Biram’s first since his 2011 LP Bad Ingredients... He mixes gospel and blues standards with gritty originals... “When I Die” is a gently bounding country-gospel original that’ll have ya shoutin’ “amen” by the end."
(More Info)

Crystal Method
"Over It" (w/ Dia Frampton)
'Crystal Method'
Tiny e, 2014
Note: Well, look who's back! I'll always remember dancing with friends atop the La Sandia Mountains in New Mexico as it turned Y2K with 'Vegas' blasting on the boombox. "On their fifth studio album, big beat veterans the Crystal Method attempt to [keep their music from sounding too dated], reintroducing themselves with a self-titled effort that finds the duo adding a bit of modern snarl to their synth-heavy sound... Although this album certainly has an aggressive streak, guest vocals from singers like LeAnn Rimes and Dia Frampton (who some might remember as a runner-up from Team Blake on The Voice) bring back the late-night, velvet-rope quality that helped set the duo apart from contemporaries like the Chemical Brothers nearly two decades ago." My buddy Johnathan just saw these guys at the El Rey in LA last week.
(More Info)

Lucius
"Turn It Around"
'Wildewoman'
Mom+Pop, 2013
Note: "“Turn It Around” is an emphatic, highly percussive track that’s a “Hollaback Girl”-style callout in more ways than one. Wolfe and Laessig’s vocals wail over a bouncing beat, rising in tension during the vocals to build to a brilliant chorus that sums up the song’s troubled protagonist’s dilemma: “She’s looking through the wrong end of the telescope/turn it around, turn it around”. “Turn It Around” feels vibrant, but never saccharine; a reminder that pop as just much fun when it’s stinging as it is when it’s sweet." The Los Angeles, Cleveland, Houston, Northwood and Marquette band will be back to the Pacific Northwest in February...
(More Info)

Dum Dum Girls
"Rimbaud Eyes"
'Too True'
Sub Pop, 2014
Note: "The Universe is a cruel mistress. Her incessant need to achieve balance means that in the same breath that exhales the Dum Dum Girls stellar new album, Too True, their contemporaries, Vivian Girls, announce their dissolution... Lead singer Dee Dee (known to friends and family as Kirsten Gundred) employs her confident, dreamy voice throughout, and nowhere better than on standout tracks “Rimbaud Eyes”... Too True clocks in at 31 minutes, and half of the album’s 10 tracks don’t even make it to the three-minute mark."
(More Info)

Digital Wild
"I Love You" (Live on KUTX)
'Into'
self-released, 2014
Note: "The Austin group blurs together a disparate number of genres–rock, hip-hop, electronica, R&B–but somehow it all hangs together... The Digital Wild just released its debut album, Into The Digital Wild, and the group is still new to the live stage... With a five-piece setup, the Digital Wild brought their moody, tense songs to life, complete with drum samples and vocal pitch-shifting. The complexity of a song like “I Love You” doesn’t obscure its blunt intensity."
(More Info)

Kristoff Krane
"Aho"
'I Freestyle Life (2005-2013)'
self-released, 2014
Note: "To help fund a new album of acoustic material, rapper Kristoff Krane is releasing I Freestyle Life, a massive collection of 44 songs from previously released albums reflecting his eight year career as an artist. This batch of material -- the proceeds of which will fund Krane's next album -- includes collaborations with Eyedea, Sage Francis, Slug of Atmosphere, Buck 65..."
(More Info)

Kraak and Smaak
"Love Inflation" (Baskerville remix)
'Chrome Waves'
Jalapeno, 2013
Note: "Dutch production trio Oscar de Jong, Mark Kneppers and Wim Plug have been preparing for their shiny, smooth and stylish release under the name you might know them better as, Kraak & Smaak. Their fourth album release, Chrome Waves is out for official release on Jalapeno Records on October 28th. It's an an 11-track wonder album that explores electronic music production through a funky, disco-inspired house experience that's through the vision of a welcoming and cozy lens."
(More Info)

Elizabeth McQueen
"Mind of Men" (Live on KUTX)
'The Laziest Remix' EP
self-released, 2014
Note: "The remix record is like aural decoupage, and when it’s done right, it can be pretty darn cool. Local singer and songwriter Elizabeth McQueen just did it right. She teamed up with St. Louis alt-folk outfit Brothers Lazaroff to re-work her 2010 album The Laziest Girl In Town... The remix record, aptly titled The Laziest Remix, is her fourth solo disc, and features a sound Texas swing fans may not be used to."
(More Info)

Magic Mouth
"Swampy Seconds"
'Devil May Care' EP
self-released, 2013
Note: "The Portland, OR, band is energetic, positive-focused and live with that phunk! The band, in fact, brings to mind the British group, The Heavy... Magic Mouth’s song “Swampy Seconds” opens your half-awake eyes right up. The four-piece, which recently released their second EP, has a way with fast-paced music complete with shaking snares, booty-moving bass and dancing electric guitar."
(More Info)