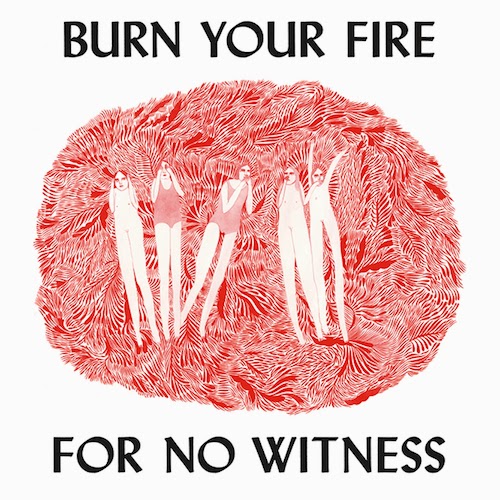 Lost in the Trees
“Past Lives”
‘Past Lives’
ANTI-, 2014
Note: “Lost In The Trees’ last album, A Church That Fits Our Needs helped frontman Ari Picker deal with the loss of his mother, who committed suicide in 2008. The Wall Street Journal boldly named it their favorite album of 2012. The Chapel Hill, North Carolina-based indie band are back with a revamped lineup and a powerful new record, Past Lives, out February 18 on ANTI-.“
(More Info)

Thumpers
“Sound of Screams”
‘Galore’
Sub Pop, 2014
Note: We heard the UK band’s song “Unkinder” two weeks ago on Episode097. “Recent Sub Pop signees… The London-based duo — comprised of Marcus Pepperell and John Hamson Jr., both of whom have been friends since they were 11 — self-produced the record alongside David Kosten (Bat For Lashes, Everything, Everything)… the 11-track effort promises “layered androgynous vocals with muscular drums, astral synths and shimmering guitars in a celebration of the breathless sensations of youth and coming of age.”“
(More Info)

School of Language
“Between The Suburbs”
‘Old Fears’
Memphis Industries, 2014
Note: The latest from the UK’s Field Music member David Brewis’ side project is “an album that continues Brewis’ knack for using studio-intrinsic, pop-indebted indie rock as a vessel for his examination on, in his own words, “things to do with love and things to do with fear”. Brewis cited early ’00s Neptunes production as a key influence on Old Fears, and the hip-hop duo’s sharply clipped funk can be felt over the cleanly chaotic “Between the Suburbs”“
(More Info)

Lucinda Williams
“Something About What Happens When We Talk”
‘Lucinda Williams’ (2014 Reissue)
self-released, 1988
Note: “That this essential work has been out of print for 10 years seems inconceivable. Fortunately, this 2-CD, 32 track reissue celebrating the 25th anniversary of the release of “Lucinda Williams” redresses that outrage brilliantly… The second disc also collects six more stray cuts, including two live acoustic gems, “Something About What Happens When We Talk” and the indispensable non-album ballad “Sundays,” recorded at KCRW, the Santa Monica-based radio station.“
(More Info)

Doug Keith
“Harvest Home”
‘Pony’
Village Label, 2014
Note: “There are two sides to [NY-based] Doug Keith. He’s a self-avowed punk rock superfan, often blogging about how Fugazi is the greatest live band ever (hard to argue there) or about how Sonic Youth keeps him creatively healthy. But he also loves country music, and he brings these two sides together as a sideman for Sharon Van Etten… Pony sounds like the result of the road, full of weathered ballads and hard-luck tales. But the record is anything but hurried; Keith patiently teases out his songs at a folk-rock pace. “Harvest Home” finds the singer ambivalent about returning home, building tension with little more than acoustic guitar and piano.“
(More Info)

Ming City Rockers
“I Wanna Get Out Of Here But I Can’t Take You Anywhere”
Mad Monkey, 2014
Note: “Ming City Rockers hail from the fine English town of Immingham… Huw Stephens on BBC Radio 1 said that Ming City Rockers may be the best rock and roll band to ever come out of Immingham, but as the band wryly puts it, there wasn’t much competition to begin with. But that doesn’t mean you shouldn’t listen to Ming City Rockers. In fact, if you like freakishly energetic classic rock akin to the Stooges and Eddie Cochran, you won’t get much better this side of the pond.“
(More Info)

Mainland
“Savant”
‘Shiner’ EP
self-released, 2014
Note: “Following the death of his father, singer/guitarist Jordan Topf decided to get out of New York and hit the open road. He and his band, Mainland, set out on a cross-country tour where they workshopped new songs each night in front of a new crowd. While in Austin, the quartet met Jim Eno–drummer/producer for Spoon and owner of Public Hi-Fi recording studio–and set up some dates to capture their fresh material. Mainland returned to Public Hi-Fi a few months later with just four songs, but the tight focus meant no distractions… As is his M.O., Eno captured the band live in the studio, to great effect… “Savant” took some serious work to get just right, but it was fun nonetheless. Topf states that the song “was the result of a 14-hour recording day fueled by many fresh pots of coffee, bourbon in the vocal booth, and a few runs to Tacodeli to keep up the energy in the studio.” Sounds like a great recipe.“
(More Info)

Elizabeth & The Catapult
“Shoelaces”
‘Like It Never Happened’
Scratchback, 2014
Note: We heard the title track two weeks ago and now here’s the lead single from their new record. “After parting company with Verve Forecast after 2010’s The Other Side of Zero, Elizabeth Ziman began learning how to play guitar and busking in New York subways. Since her previous two albums were written on piano — her first instrument — new possibilities presented themselves for this offering.“
(More Info)

Fanfarlo
“Life in the Sky”
‘Let’s Go Extinct’
Blue Horizon, 2014
Note: It’s nice to get a taste of All Songs Considered’s favorite London-based band here on PUTV! “Fanfarlo have been hovering on the peripherals since the release of their first album in 2009, with their sweeping, instrument-laden melodic pop springing up on US TV shows galore. Now back with their third album, Let’s Go Extinct aims to put the band back on the map, getting back in touch with their original folky pop sound, sprinkled with ambient musings on the big questions.“
(More Info)

Angel Olsen
“High And Wild”
‘Burn Your Fire For No Witness’
Jagjaguwar, 2012
Note: We heard “Forgiven/Forgotten” last month, but this week the Chicago-based singer/songwriter gives Episode099 its title track! Pretty Much Amazing says, “the second LP by the Missouri-born artist, aims to be a creative jump, her breakout work. At its finest, Burn Your Fire for No Witness nimbly mixes strummed acoustic intensity with fuzzy garage-rock verve… Jangling rave-up “High and Wild”…“
(More Info)

Western Haunts
“Magazines”
‘Western Haunts’
self-released, 23014
Note: “As their name implies, Western Haunts’ music conjures sounds and sentiments that may have occurred long ago (shoegaze and ’70s folk rock tones are key touchstones), but their still-resonant features continue to swim in the musical bloodstream. Across two EPs and their recently-released debut album, the Seattle quartet…have slowly sharpened their sweeping harmonics into something that’s nothing short of gorgeously gauzy… While “Magazines” is clearly indebted to early ’90s shoegaze, its secret is that it exchanges any noise or experimental tendencies for ones rooted in acoustic songwriting…“
(More Info)

There Will Be Fireworks
“River”
‘The Dark, Dark Bright’
Comets & Cartwheels, 2013
Note: “Scotland has been particularly good at producing emotionally charged bands the past few years (see: Frightened Rabbit, CHVRCHES), but despite hailing from a country with high standards for music that can be both mournful and triumphant, There Will Be Fireworks follow through on the bombast that their name promises… “River”, three minutes of confessional catharsis so gripping that it leaves you equally exhausted and exhilarated when it’s over.“
(More Info)

Lake Street Dive
“Bad Self Portraits”
‘Bad Self Portraits’
Signature Sounds, 2014
Note: “The originally Boston-based band Lake Street Dive (now headquartered in Brooklyn) is poised for the big time. After attracting 1.2 million hits on YouTube for a sidewalk rendition video cover of the Jackson 5’s “I Want You Back”, recorded in 2012, the band’s star track has been ascending rapidly. Not only is the band now playing the likes of Carnegie Hall, the group, appeared last year as part of an all-star concert to promote the Coen Brothers’ film Inside Llewyn Davis.“
(More Info)

Lizzo
“Paris”
‘Lizzobangers’
Totally Gross National Product, 2013
Note: Last heard on Episode083, the Houston-bred, Minneapolis-based rapper returns with another banger! “Since moving to Minneapolis in 2011, Lizzo has been setting off the Twin Cities hip-hop scene, winning over crowds and collecting plenty of local acclaim with her groups the Chalice, GRRRL PRTY, and Tha Clerb. And now, the vibrant MC has put together a spirited new solo record, Lizzobangers, with the help of Doomtree DJ/producer Lazerbeak and Gayngs/Marijuana Deathsquads/Polica mastermind Ryan Olson. The self-assured results of their fruitful collaboration are featured throughout this raucous, inspired album, which finds Lizzo seizing her moment with a tight, potent grip on the mic that she doesn’t loosen once during the record’s 13 banging tracks.“
(More Info)

Sea Wolf
“Kasper” (Live on KUTX)
‘Old World Romance’
Dangerbird, 2012
Note: “Alex Brown Church is patient with his own music… In fact, he was his own band for Sea Wolf’s third effort, Old World Romance, which came out in 2012. Church played all the instruments, creating a lush pop record that’s dreamy in places while still maintaining that home-recorded intimacy… Today’s song of the day comes from Sea Wolf’s 2013 Studio 1A live performance, a session that featured Church alongside his touring band. The group fleshed out several songs from Old World Romance including the highlight “Kasper.”“
(More Info)

One response to “@PumpUpThaVolume: Episode099 – High And Wild”