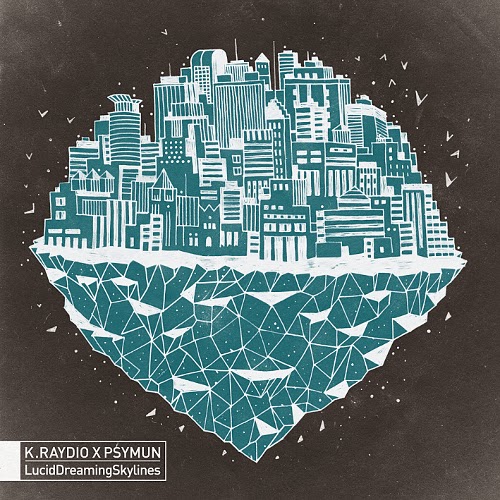 ****************************************
♬Liner Notes♬: This week cracks the hour-mark which I've been trying to avoid since our new leaf ways of curating tracks, mixing/sequencing better and staying under one hour. Well, there was too much great music this week, especially the live exclusives from KUTX's SXSW show. Our tracks that didn't make the cut are listed as b-sides below and they're still on our now-more-important-than-ever Spotify playlist. Let's get it on!

Temples
"Sun Structures"
'Sun Structures'
Fat Possum, 2014
Note: We heard "Shelter Song" back on Episode097, now let's get the title track from the UK darlings debut record. "Dig out your suede jacket and dust off your Beatle boots: Temples and their debut album Sun Structures are dragging the jingly-jangly psychedelic pop sound into 2014... they channel their influences so skillfully, and have such a good ear for a melody, that it's almost impossible not to fall for them. A supremely confident and delightful debut."
(More Info)

Sylvan Esso
"Coffee"
'Sylvan Esso'
Partisan, 2014
Note: "Sylvan Esso's sound combines minimalist hip-hop beats with soulful vocal melodies courtesy of singer Amelia Meath's... the Durham, NC [duo] have released the first taste of the new record with the single "Coffee,"... a slower track that rides a funky beat of bells, clicks, and keyboard hits. It's more subdued than the band's other tracks, but "Coffee" is nonetheless a standout."
(More Info)

Kita Klane
"Running Circles" (Mexican Institute of Sound Remix)
self-released, 2013
Note: We heard the original version of this song, featured on the 'In Love With the Enemy' EP, back on Episode090. "With a voice seemingly pulled straight from the back of a smoke-filled 1960s jazz club and a demeanor that’s oozing with charisma, L.A. singer Kita Klane’s desert soul is dangerously alluring... The original version of “Running Circles” is a sultry slow burn, but after being remixed by Mexico City-based electronic musician Camilo Lara (under his Mexican Institute of Sound moniker), it receives a vintage-styled makeover that accentuates Klane’s smoky voice."
(More Info)

Lucius
"Tempest" (Live at KUTX's Four Seasons SXSW 2014)
'Wildewoman'
Mom+Pop, 2013
Note: They gave Episode095 its "Turn It Around" title track, now the Brooklyn five-piece is back for another bow on PUTV - and this time, it's live. "Lucius spins some intriguing sounds on their debut full-length album, Wildewoman. Siren vocalists Jess Wolfe and Holly Laessig front the band with an identikit aesthetic, their mod fashion and matching hairdos producing the expectation of a retro sound. Yet, while there are obvious nods to ’60s girl groups in songs like the thrusting “Turn It Around”, the material shows a surprising range and an individualism that marks the record as far more contemporary... The two women command their stage throughout, taking disparate styles in their stride... Such assurance is equally evident on “Tempest”, as the duo blends wistful verses with a raging storm of a chorus."
(More Info)

Liz Vice
"Empty Me Out"
'There's a Light'
self-released, 2014
Note: The Portland soulster describes herself as "Jesus lover, artist, and just crazy enough" and we're happy to have her here on PUTV. ""There's A Light" is Liz Vice's debut album... Recorded almost entirely live to analog tape over the spring & summer of 2013 in Portland, OR, this album is a gospel-fueled nod to the R&B / soul records of the 60's and 70's - modern enough not to be "throw back", classically influenced enough to feel timeless."
(More Info)

Elephant
"Elusive Youth"
'Sky Swimming'
Memphis, 2014
Note: The Paris and UK duo got together, made an EP, broke up and then made a full-length. "Blending pure melodic instincts with modern psychedelic sensibilities and a magnetic presence, Elephant’s airy, indie-goes-girl-group pop is a musical counterpart to its creators’ own star-crossed story... After tracking the band’s progression across the stray singles they’ve released in the interim, “Elusive Youth” feels like the culmination of the band’s experiments... it’s buzzing with a breezy confidence, layering bright keyboards..."
(More Info)

CYMBALS
"The Natural World"
'The Age of Fracture'
Tough Love, 2014
Note: "Although they started as a arty, post-punk influenced duo, London’s CYMBALS have evolved into a fully-functioning quartet who excel in making clever and often funky electronic music... For their sophomore effort, this year’s The Age of Fracture, the band drew equal influence from Daniel T. Rodgers’ eponymous sociohistorical book and their love of ’80s pop, particularly that of Whitney Houston. If those components sound at odds with each other, it’s because they are, but the end result is both remarkably accessible and rewarding, not the least on “The Natural World”. The track is sequenced like an ’80s 12″ edit: lengthy but never proggy, danceable but not necessarily disco-ready... takes Some Great Reward-era Depeche Mode’s assembly line approach to electronic music..."
(More Info)

Jetta
"Feels Like Coming Home"
'Start a Riot' EP
Polydor/Republic, 2013
Note: "After relocating to London from her native Liverpool, British singer/songwriter Jetta began her career as a gun for hire, singing backup for Paloma Faith and Cee Lo Green... In 2013 she released her debut EP, Start a Riot, and the soulful title cut became a breakout underground hit in the U.K., drawing comparisons to Florence + the Machine, the xx, and Adele. Working with producer Jim Eliot (Ellie Goulding, M.I.A.), Jetta set about recording her debut LP, due in 2014."
(More Info)

Wye Oak
"Shriek" (Live at KUTX's Four Seasons SXSW 2014)
'Shriek'
Merge, 2014
Note: "When Wye Oak announced the release of their fourth album, Shriek, the Baltimore duo stated that no guitars appear on the record... While Shriek doesn’t see a release until April 29, Wye Oak debuted the new sound live at the Four Seasons with us during SXSW 2014. Wasner doesn’t view the shift in direction as too crazy; after all, she’s merely switching tools, not voice. Songs like the beautiful “Shriek” are bigger and bolder, but they’re still given that characteristic Wye Oak edge." And that's not the only change, they've gone from Secretly Canadian to Merge!
(More Info)

Phox
"Kingfisher" (Live at KUTX's Four Seasons SXSW 2014)
self-released, 2014
Note: "“Lovely.” “A new favorite.” “Wow!” These were just a few of the comments after Phox’s performance with us at the Four Seasons last week during SXSW. The Wisconsin-based band was largely unknown heading into the festival, with just a few EPs to their name. But their dynamic live show–featuring Monica Martin’s sublime, airy vocals alongside the band’s dreamy folk/electronic mix–is not to be missed. The group already has performances at Lollapalooza and iTunes Fest in London under its collective belt, and they’re currently working hard on their debut album at April Base, the studio owned and operated by Bon Iver’s Justin Vernon. Here’s hoping “Kingfisher” winds up on the finished record. The song weaves a potent spell, ebbing and flowing between group harmonies and Martin’s ready-for-the-spotlight voice."
(More Info)

Psymun and K.Raydio
"Joyride"
'LucidDreamingSkylines'
self-released, 2013
Note: What happend when two Minneap musicians get together? "K.Raydio and Psymun just dropped their first collab project, Lucid Dreaming Skylines. The album symbolizes a redefined K.Raydio and an ever-present Psymun. Follow Raydio as she discovers and divulges a brand new sense of self. The album just hit #7 on Bandcamp for best-selling albums and #1 for R&B/Soul."
(More Info)

Be Forest
"Colours"
'Earthbeat'
We Were Never Being Boring, 2014
Note: "European Japandroids fans might recognize Be Forest from the Pesaro, Italy band’s stint opening for Vancouver’s nostalgic YOLO fist-pumpers. But as the new single “Colours” reveals, Be Forest doesn’t sound much like Japandroids. Rather, their take on pop-rock is as atmospheric as it is aerobic — sturdy backbeats laden with plentiful reverb, many layers of guitar tremolo, and ethereal coos. Fans of Stereolab, Broadcast, and Little Dragon will probably dig it."
(More Info)

Black Pistol Fire
"Hipster Shakes" (Live at KUTX's Four Seasons SXSW 2014)
'Hush Or Howl'
Modern Outsider, 2014
Note: "From Canada all the way to Austin, Kevin McKeown and Eric Owen have stuck by each other... Their reputation as one of the hardest working bands in Austin was sealed with an amazing performance live at the Four Seasons during SXSW. While Owen was brought to mind Animal from the Muppets, McKeown jumped onto a table in the front row to play a solo. And they put their own version of Bob Dylan’s “Rainy Day Women #12 & 35″ into the intro to “Hipster Shakes”–all in all, one of those perfect, one-of-a-kind SXSW experiences."
(More Info)

Gibraltar
"Satisfied"
'The New Century'
Factory Belt, 2014
Note: Whoa, we closed with these guys 69 episodes ago on Episode034! "The players of Gibraltar have come from far and wide — from Ohio, Illinois, Washington and Kentucky — to make up the band. Also, as part of the new movement of Seattle musicians where members can play in several bands each and not feel tied to just a single project... “Satisfied”, the band’s new single, is a tongue-in-cheek titled track exemplifying the band’s rock prowess. The title, though, attempts to chide us — well, those of us who feel satisfied in any way. For, in art, in music, and in life in general, there can be no true satisfaction. Right?"
(More Info)