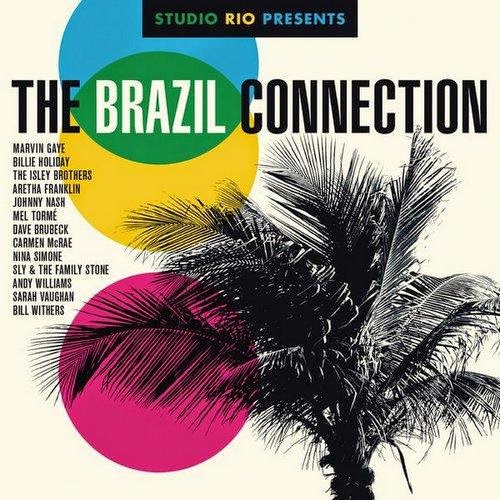 Previous: Episode117 - Cake And Eat It

Sante Les Amis
"Brasil"
'Sudamericana'
Nacional, 2014
Notes: "During the last five years, Uruguayan dance punk darlings Sante Les Amis released two promising EP’s, Sante Les Amis and Morning Shine, garnering critical acclaim in their homeland... After two years of silence, the band unleashed upon us the full fury of Sudamericana: an eleven track record where the band demonstrates, not only their knowledge of the new wave/disco punk canon, but their ability to stray beyond their influences to create a sound both fresh and unique in South American rock." Song source KCRW says, "Uruguay’s Sante Les Amis will make their U.S. debut as part of the Latin Alternative Music Conference in New York..."
(@SanteLesAmis)

AJ Davila
"Lo Que No Sera" (w/ Alex Anwandter)
'Terror Amor'
Nacional, 2014
Notes: "Puerto Rico's AJ Davila makes his solo debut with infectious energy and the help of his friend Chilean artist Alex Anwandter on..."Lo Que No Sera" (“What Shall Not Be”)." We heard from AJ a few months ago on Episode107.
(@AJDavilaSix)

Clap Your Hands Say Yeah
"Coming Down" (w/ Matt Berninger)
'Only Run'
self-released, 2014
Notes: "Only Run, both in form and function, is CYHSY‘s return to relevance, excellence even, and one of the best independent rock records of 2014. As if referencing his band’s complex history in the genre of indie rock, Ounsworth invited the National‘s singer, Matt Berninger, to perform guest vocals on lead single, “Coming Down”." We heard "As Always" from the new CYHSY record last month on Episode114.
(@CYHSYband)

Corb Lund
"Counterfeiters’ Blues"
'Counterfeiters’ Blues'
New West, 2014
Notes: "On very short notice, Americana and Canadian Roots artist Corb Lund was given the chance to record an album at the legendary Sun Studios in Memphis, TN. There were two challenges, it would be filmed for a CMT-TV special and he had two days to record. Taking advantage of Sun’s recording live-off-the-floor nature, Corb recorded Counterfeit Blues - an electric, raw and pure homage to the sound of Sun Studios."
(@CorbLund)

Popstrangers
"Country Kills"
'Fortuna'
Carpark, 2014
Notes: "Last year, New Zealand band Popstrangers moved to London and put out a pair of songs to mark that change in their lives. One of those songs was called “Fortuna,” and though the song doesn’t appear on the band’s newly announced album, Fortuna, that single seems to have been an indication of where Popstrangers are headed. So where are they headed? New single “Country Kills” pushes them into even more lush and melancholic territory, without sacrificing any of their pop bounce."
(@Popstrangers)

Flyying Colours
"Not Today"
'Not Today'
Shelflife, 2014
Notes: "Fans of shoegaze might feel a pleasant familiarity upon hearing the first moments of “Not Today,” but those melodic vocals enclosed in a warped mass of guitar and drums aren’t My Bloody Valentine or Ride, they’re Melbourne’s Flyying Colours. Not Today will be the band’s debut full-length, following their 2013 EP."
(@FlyyingColours)

EDJ
"Lose It All, All The Time"
'EDJ'
Easy Sound, 2014
Notes: "As the frontman for the Fruit Bats, Eric D. Johnson wrote sunny folk-pop songs with a psychedelic vibe. After the band’s demise last November, Johnson has gone solo under the alias EDJ and is striving to break away from that happy-go-lucky sound."
(@EDJjams)

Mirah
"24th St."
'Changing Light'
K, 2014
Notes: "Mirah has come a long way in terms of refinement as her songwriting muse grew from the dog-eared D.I.Y. indie folk of her early days into subdued masterpieces... Fifth album Changing Light comes five years after her last proper solo album, (A)spera, and also follows a particularly harrowing breakup. The passing of time and the process of separation that starts with sadness and transforms into seething anger can be heard all over Changing Light."
(@MirahMusic)

Juana Molina
"Ferocisimo"
'Wed 21'
Crammed Discs, 2013
Notes: "On Argentina's Independence Day [July9] we check in with Juana Molina. On her latest album, the Buenos Aires-based artist fuses folk with electronic loops, as you can hear on..."Ferocisimo" (or “Most Ferocious”)." PopMatters says, "Constructed from looping bass lines, whirring guitars and keyboards, and her enigmatic, murmuring voice, this latest collection of songs from Argentina’s premiere electro-folk songstress is a glorious mess of sound... Wed 21 represents a thoughtful continuation of 2008’s Un día, which traveled similar soundscapes, equally littered with looping fragments and weirdly juxtaposed rhythms." It's also another "Best of 2014" contender album AND she's playing a free Summerstage show in Central Park NYC as we speak!
(#JuanaMolina)

Genuine Leather
"The Viper"
'Losers'
self-released, 2014
Notes: "The best kinds of pop songs are over before you want them to be, leaving you desperately wanting more. This is the kind of approach that Austin’s Genuine Leather takes on its second release, Losers. While their self-titled debut felt tentative and the 2012 EP Crude Magic more than lived up to its name with a scruffy, lo-fi charm, Losers feels fully-realized, delivering hook after hook in concise blasts. One of these blasts is the leadoff track “The Viper.” Over a tightly coiled beat, the song cycles through some high-octane power-pop riffs, nodding towards Spoon, Guided By Voices, and Cheap Trick. The only bad part? It’s all over in just 120 seconds."
(@GenLeath)

Burgess Meredith
"Me As In You"
'Banana Moon' EP
self-released, 2012
Notes: "Austin’s Burgess Meredith open[ed for the Polyphonic Spree in Austin last week]... Formed in 2010, the group’s members have spent time with the Lemurs and the Polyphonic Spree, taking their name from the actor who popularized the Penguin in the campy Batman TV series of the 1960s. Likewise, Burgess Meredith (the band) takes its cues from the ’60s, matching colorful keyboards with airy girl-guy harmonies. They’re sharper than a lot of ’60s-derived garage groups, spiking their songs with darker passages (akin to Of Montreal). While hard at work on a follow-up, we’re offering a cut from their 2012 debut EP Banana Moon as today’s song of the day–the twisting-and-turning “Me As In You.”"
(@BurgessBand)

Dana Buoy
"Preacher"
'Preacher' EP
Middle West, 2014
Notes: "For your go-to catchy summer song, look no further than Dana Buoy’s ”Preacher”. Staying true to his name, Dana Buoy (a.k.a. Dana Jansson) lifts your spirits with the first synth notes of the title track off of his upcoming EP, Preacher. It’s the Portland-based artist’s first release since his solo debut, Summer Bodies, in 2012. We may know Janssen as Akron/Family’s drummer..."
(@DanaBuoy)