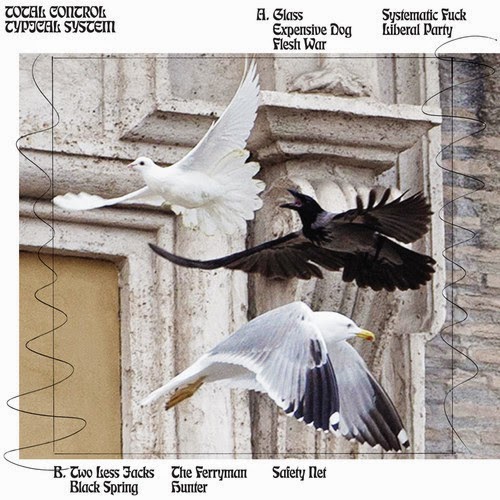 Total Control
"Flesh War"
'Typical System'
Iron Lung, 2014
Notes: "A lot of bands like to say they pull from classic 80s post-punk and new wave, but in recent years, there’s no record that has pulled it off quite like Total Control’s Typical System. The Australian post-punk band’s LP is an eclectic mixture of post-punk sounds, ranging from danceable, synth-heavy dance numbers to Public Image-type punk throw-downs." They may be from Melbourne, but their label is based in Seattle...
(#TotalControl)

Spoon
"Rent I Pay/Do You"
'They Want My Soul'
Loma Vista, 2014
Notes: "The last time Spoon released an album, 2010’s Transference, they had just been named Artist of the Decade by Metacritic... Transference’s successor, They Want My Soul, has been heralded as Spoon’s push for a full-blown mainstream breakthrough. Quite aside from the new label, there is the use of external producers in the shape of industry veteran Joe Chiccarelli and alt-rock go-to-guy Dave Fridmann, and a more straightforward radio-friendly heft you can hear in the melodies of Do You... given the audible debt of Daniel’s vocal style to that of Elvis Costello, opener Rent I Pay’s resemblance to Uncomplicated, the pounding, relentless opener of Costello’s 1986 album Blood and Chocolate, seems like a knowing nod..."
(@SpoonTheBand)

The Crookes
"Don’t Put Your Faith In Me"
'Soapbox'
Modern Outsider, 2014
Notes: "Listening to the Crookes can often feel like a game of spot the influence, UK Edition. Fortunately, the Sheffield group’s tastes and influences skew to the impeccable, crafting exceptional indie pop heavy on hooks and possessing exemplary lyrics... “Don’t Put Your Faith in Me” is incessantly catchy guitar pop with a harder edge underscored by a lyrical innocence generally more associated with indie pop. Like just about everything else here, its melody is hummable, hook-y and catchy as hell..."
(@TheCrookes)

J Mascis
"Every Morning"
'Tied To A Star'
Sub Pop, 2014
Notes: "Much like his debut, 2011′s Several Shades of Why, the new album boasts a strong supporting cast, including Pall Jenkins (Black Heart Procession), Mark Mulcahy (Miracle Legion), and Chan Marshall (Cat Power). An exciting edition to the line-up is musician Ken Maiuri, who has not only toured with Mulcahy and Pedro The Lion, but also accompanies the New England senior citizens choir, Young@Heart Chorus. And much like his debut, Tied to a Star features Mascis turning down the amps from eleven, and showcasing his exquisite songwriting."
(@JMascis)

The Black Angels
"An Occurrence At 4507 South Third Street"
'Clear Lake Forest' EP
Blue Horizon, 2014
Notes: "The Black Angels are no strangers to the kaleidoscopic heritage of their native Austin, Texas, and on ‘Clear Lake Forest’ they paint a psychedelic rainbow across a host of ’60s American icons... The Black Angels’ psych scholarship pays dividends here." This seven-track EP was originally released on Record Store Day '14. Also, we heard two tracks from their last full-length on Episodes051/054.
(@TheBlackAngels)

Courtship Ritual
"Kingdom of Beauty"
'Pith'
Godmode, 2014
Notes: "Courtship Ritual can do more with a bass, synth, and drum machine than a lot of bands can do with twice as much gear. The Brooklyn duo...takes simplicity and minimalism to dizzying heights on its debut album, Pith. Recalling like-minded acts such as Beach House or the xx... the arresting “Kingdom of Beauty,” which rides a bubbling bass line as its melodic center before shifting into a full-on summer party song almost halfway through its short running time."
(@CourtshipRitual)

Shabazz Palaces
"They Come in Gold"
'Lese Majesty'
Sub Pop, 2014
Notes: "The first hip-hop crew signed to the Sub Pop label, Shabazz Palaces is the brainchild of Ishmael "Butterfly" Butler, although the Digable Planets member wasn’t so quick to admit it... [Sub Pop] signed the project, releasing their debut album, Black Up, in 2011. Next, it transpired that Tendai Maraire — son of the famous mbira player Dumisani Maraire — was responsible for most of the instrumentation on that record and that Shabazz Palaces was, in effect, a duo." We heard from Shabazz Palaces almost two and a half years ago on Episode005.
(@ShabazzPalaces)

The Acid
"Fame"
'Liminal'
Mute, 2014
Notes: "Even if they're not billed as a supergroup, the Acid's three members boast a formidable amount of talent (and other projects)... the trio's full-length debut, Liminal, is remarkably restrained in its ever-shifting balance of indie, dance, and R&B... "Fame," with its beautiful juxtaposition of fizzy warmth and cool tones, might still be the Acid's most immediately engaging song."
(@theAcid)

Luluc
"Without a Face"
'Passerby'
Sub Pop, 2014
Notes: "In a world where instant gratification is the norm, patience has become a rare commodity. But for Zoë Randell and Steve Hassett, who make up indie-folk duo Luluc (pronounced Loo-LUKE), letting things unfold in due time not only defines their career trajectory, it also works as a pretty good description of their approach to making music...  There’s no question that everything these Australians (who split their time between Melbourne and their adopted hometown of Brooklyn) have done in their lives has been leading up to this summer’s Passerby, their second album..."
(@Luluc)

Gustavo Santaolalla
"Seguir"
'Camino'
Sony Masterworks, 2014
Notes: "Fans of film have definitely heard the music of Gustavo Santaolalla, either in Brokeback Mountain, one of two film scores for which he's won an Academy Award, or the films of Alejandro González Iñárritu (Amores Perros, 21 Grams, Biutiful and Babel, for which he won his second Oscar). He's also won over a dozen American and Latin Grammys and been nominated for an Emmy, making him a legitimate EGOT threat as his career continues. Camino is his first collection of solo music since 1998's acclaimed Ronroco... the 10-stringed instrument with which he's the most often affiliated."
(#GustavoSantaolalla)

Blooper
"Tinted Windows"
'So Very Small' EP
Jigsaw, 2014
Notes: "Whether it be their psychedelic dalliances or garage-rock flourishes, up-and-coming Seattle-based trio Blooper, with the release of their debut EP in early July, have created a blend of tracks with a driving force of its own, illustrating that Seattle’s still a powerhouse for dirty DIY rock ‘n’ roll... With “Tinted Windows” their characteristically fuzzy and unfiltered, 60s-inspired sound shines right through and the result is a sweet, three-minute morsel that displays their current prowess and future plans. In summation, the grungy feel of Today’s Song of the Day’s a perfect track to get you through those sweaty, heavy August nights."
(#BlooperMusic)