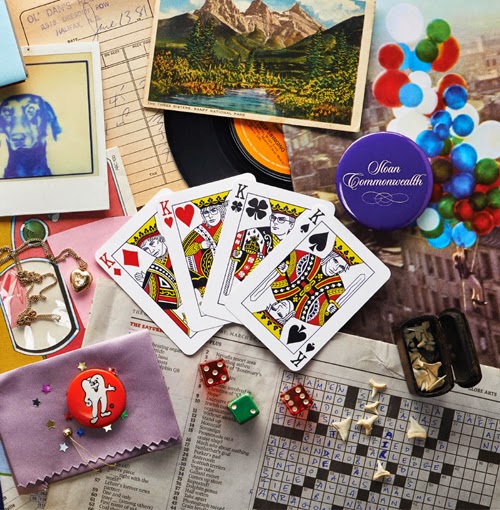 Sloan
"Carried Away"
'Commonwealth'
Yep Roc, 2014
Notes: "Throughout their 25-year year career, Toronto pop-rockers Sloan have taken a democratic approach to music. But after some 10 albums of contributing equally to songwriting and recording, the band members decided to take a more novel process for the follow-up to 2011’s The Double Cross. Though still working together in one room, each of the four members were responsible for writing and shaping their own section... The chamber pop track [“Carried Away”] plays to Murphy’s knack for writing radio-ready hits, complete with a doubly infectious melody and finger snaps. The track goes back and forth between an upbeat, “That Thing You Do” aesthetic and lush string arrangements as Murphy mourns his lover falling in love with another man. It’s a prime example of the “sad-song-that-sounds-happy” songwriting Sloan has perfected over the years." We FINALLY get to play my favorite favorite band and they're in town next week!
(@SloanMusic)

Ex Hex
"Don't Wanna Lose"
'Rips'
Merge,2014
Notes: "Last year, Mary Timony, the former Helium frontwoman and Wild Flag co-leader, founded a new power trio called Ex Hex. They were one of the best bands I saw at this past year’s SXSW — a fun-as-hell supercharged take on Ramones punk and Cheap Trick power-pop, direct and catchy beyond belief... the band has finally announced the impending release of Rips, their debut album, which should be awesome. First single “Don’t Wanna Lose” is a full-blooded guitar-pop anthem, and it rules hard."
(#ExHex)

Bully
"Milkman"
'Milkman' b/w 'Faceblind'
Chicken Ranch, 2014
Notes: "...there’s depth to [Nashville trio] Bully’s sneering, angular grunge pop, and whether or not you cast it against a backdrop of ’90s greats like The Breeders — or, say, Whip-Smart-era Liz Phair — it’s pretty damn fun to listen to."
(@BullyTheMusic)

Jessica Hernandez & The Deltas
"Caught Up"
'Secret Evil'
Dead Owl/Instant, 2014
Notes: "Jessica Hernandez and the Deltas’ first LP is a fully-realized realm, a dimension glimpsed in the group’s series of preceding EPs. Queasy carnival music, hoodoo blues stomps, country waltz ballads, primitive rock and jazzy inflections coalesce and flow around the anchor of Hernandez’s rich voice, a contralto rife with character and heartrending soul... and with a fuck-off defiance in “Caught Up”..."
(@DetroitJess)

Emily Wolfe
"Missionary Son"
'Roulette' EP
self-released, 2014
Notes: "With each release, Emily Wolfe keeps expanding her sound. The Austin native’s 2012 debut, Director’s Notes, was a sparse, largely-acoustic record, but the follow-ups have been anything but. Working with Spoon’s longtime producer Mike McCarthy... Now comes another EP (out tomorrow) called Roulette that covers a wide stylistic range. From the stomping glam-rock of “Swoon” to the jazzy, propulsive “Missionary Son,” Wolfe continues to push her own boundaries, especially in the live setting. Catch her at ACL Fest 2014..." We heard "Swoon" from Emily Wolfe on good 'ol Episode100 back in March 2014!
(@EmilyWolfeMusic)

RBTS WIN
"Death Magic"
'Palm Sunday'
Tidal Prism, 2014
Notes: "Palm Sunday (Deluxe Edition) is the fully loaded re-release of RBTS WIN's most provoking work to date. Javier Bolea and Cliff B. Worsham use luxurious samples to create an atmosphere of their music that is impossible to escape. Bolea brings the tropical vibes of his hometown Miami to mesh with the mystical echoes of the mountainous home of Wosham in Asheville, North Carolina to produce an album rich in sound and balanced in harmony."
(@RBTSWIN)

Goat
"Words"
'Commune'
Sub Pop, 2014
Notes: "If you’re looking for subtlety, look elsewhere than the Swedish psychedelic collective GOAT. The first hint that Commune, the band’s second album, will be a strange and deeply serious affair is in the audacity of its opening track, “Talk to God.”... “Words” takes the baton from the long opening track and distills its force into an electrified three minutes of booming drums and guitars that ring out like saws, screaming as they unleash a terrible energy... In presentation, GOAT makes wild psychedelic rock seem part of ancient human tradition and Commune comes across like an artifact of primal, bygone days." Another band making their third stop, we last heard Goat on Episode067.
(@GoatBand)

Motopony
"Get Down (Come Up)"
'Idle Beauty EP'
eOne, 2014
Notes: "Critically acclaimed indie-rock group Motopony have signed a universal deal with Entertainment One Music (eOne Music) to release a new EP and full-length album which will follow the group’s 2011 eponymous debut... the group is taking the show on the road with an extensive tour with opener Family Crest, kicking off on Sept. 19 Neumos in their hometown of Seattle. Motopony is also prepping their sophomore full-length slated for release in spring 2015. They’re reportedly working with producer Mike McCarthy (Spoon, Heartless Bastards, Trail Of The Dead)."
(@Motopony)

Generationals
"Black Lemon"
'Alix'
Polyvinyl, 2014
Notes: "As the end of summer nears, here's one more bouncy tune to carry you into fall. "Black Lemon," by Generationals, two former high school buddies Ted Joyner and Grant Widmer, mixes marimba-based jolliness and lyrics tinged with darkness. It looks at life's ties that bind and searches for ways to chill and not fight every battle. Generationals have made three albums together. For their fourth, Alix, they added a new dimension: the musical magician better known as producer Richard Swift." I like this NoLa duo so much, it's their third time on PUTV!
(@Generationals)

Flying Lotus
"Coronus, The Terminator"
'You're Dead!'
Warp, 2014
Notes: "Flying Lotus Says New LP 'You're Dead!' Will 'Mess Up the Game'... For his fifth outing, the L.A. producer fuses prog, hip-hop and Herbie Hancock... "All the albums I make start off one way and then blossom into something totally different," says electronic trailblazer Flying Lotus, about his forthcoming fifth LP, You're Dead! This one, it turns out, was initially a jazz record, but two years later, the final product contains everything from prog time signatures to hip-hop verses, all unified as a 38-minute journey into and about the concept of death."
(@FlyingLotus)

Stars
"From The Night"
'No One Is Lost'
Soft Revolution/ATO, 2014
Notes: "Stars' music has assumed many forms, from shimmery power-pop to full-throttle dance-floor fillers to doomy ballads about death and romantic dissolution. Throughout the Montreal band's seven-album history, the recurring thread has mostly been songs that reflect some sort of conflict... Enter No One Is Lost, a comparatively chipper new Stars album due out Oct. 14, and its six-and-a-half-minute opener, "From the Night." It's a misnomer to describe a song about embracing darkness as "sunny," but its silver linings — "Let's be young / Let's pretend that we never will die" — are as insistent as the propulsive thump of the chorus. (Stars' recording studio was situated one floor above a discotheque, and the influence bled through.)" We heard Stars way back on Episode018!
(@YouAreStars)

The Juan Maclean
"I've Waited For So Long"
'In A Dream'
DFA, 2014
Notes: "Reestablishing his ongoing project with Nancy Whang, John MacLean has dropped what, as far as we can tell thus far, is lined up to be the dance record of the year. On In A Dream, The Juan MacLean gives us a nine track, hour long beast of disco majesty. From beginning to end, the LP shakes you in a dozen different directions, sometimes tending towards the epic new wave narrations of the Human League, and at other times, bracing the cutting edge of modern house, giving bands like Disclosure a serious run for their money."
(@JuanMaclean)

Jen Wood
"Fell In Love"
'Wilderness'
Radar Light/New Granada, 2014
Notes: "In her 20+ year career, Seattle native Jen Wood has covered more ground than most musicians of her generation... At the age of 15, Wood and friend Madigan Shive formed the folk punk group Tattle Tale, maintaining a presence in the Pacific Northwest as part of the Riot Grrrl movement before dissolving in 1995... famously serving as Ben Gibbard’s duet partner on The Postal Service’s “Nothing Better”... writing a new batch of songs in fall 2010, and four years and one Kickstarter later, those songs are compiled as Wilderness. Wood’s renewed fire runs throughout album-opener “Fell In Love”, a sweeping reintroduction to Wood’s dulcet voice."
(@JenWoodMusic)