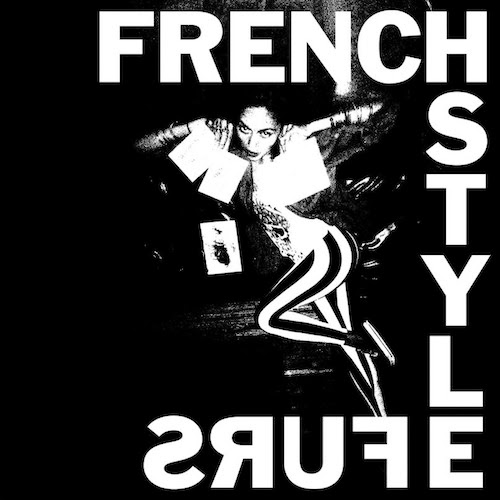 @PumpUpThaVolume: Episode132 – All The Way Down

♫Makin' a soundtrack for another planet to hear♫ on Episode132 - All The Way Down which features brand new sounds from Les Sins, Kele, Sheila Chandra, Sarah Jaffe, French Style Furs, Hundred Visions, Pond, Shakey Graves, Yusuf, Minus the Bear, Béla Fleck & Abigail Washburn, Pert Near Sandstone, The Jayhawks and The Pharmacy...

****************************************
♬Liner Notes♬: Continuing our theme of "Way" titles (last week's "Hundreds Of Way" and "Carried Away" before that), we're going "All The Way Down" with another nice slice of the best new noise around. It's a well-rounded meal of crunchy guitars, sizzling synths and delicious folk from all around the world. This week rocks French Style Furs, Les Sins, Kele, Yusuf, The Jayhawks, Shakey Graves and much more!

Les Sins
"Why" (w/ Nate Salman)
'Michael'
Carpark, 2014
Notes: "Later this fall, Toro Y Moi’s Chaz Bundick will release Michael, the first full-length from his dance-music alter-ego Les Sins. We’ve already heard first single “Bother” and seen its great video, and now Bundick has shared “Why,” a song he did with the singer Nate Salman. It’s a slick, slippery piece of disco-funk, and it’s further evidence that Bundick is really good at this lush, sculpted dance-music thing. But I sort of wish Bundick was the one singing it; that dude’s voice is awesome." It is awesome, especially on Chromeo's "Come Alive".
(@ToroyMoi/#LesSins)

Kele
"First Impressions"
'Trick'
Lilac/Kobalt, 2014
Notes: "Bloc Party’s Kele Okereke may have helped build the foundations of British indie, but in its demise he’s jumped ship, turning his attentions on a new form of alternative music. Following the release of 2010’s The Boxer, he spent his time collecting concepts for a club album during weekly DJ sets, and working out how to combine old school garage, 90s R&B, 2-step and Italo ­house with his own, inimitable vocals. Documenting the heady first sight of a prospective lover (First Impressions), it moves onto the initial stages of infatuation and lust..."
(@KeleOkereke)

Sheila Chandra
"Ever So Lonely/Eyes/Ocean"
'Real World 25'
Real World, 2014
Notes: ""We've always been vibrant, alive and kicking," says Peter Gabriel of Real World Records, the label he launched in 1989, a few years after establishing the WOMAD (World of Music Arts and Dance) Festival. "We worked hard to create an environment where the artists felt respected and supported, so that they were able to deliver extraordinary performances."" Since this track was originally released back in 1992, it seems like Sheila has left music biz (except for world/drone albums?!) for writing books about banishing clutter - forever!
(@RealWorldRec)

Sarah Jaffe
"Lover Girl" (Radio Edit)
'Let's Disconnect'
Kirtland, 2014
Notes: "Sarah Jaffe has returned with an arresting new album, Don't Disconnect, that further removes the singer-songwriter from her acoustic folk beginnings. The single "Lover Girl," which was released last month, has received an imaginative music video that recalls the oddball brilliance of David Lynch..." We kicked off Episode123 with a track from Sarah Jaffe just after her tour with the Polyphonic Spree!
(@SayJaffe)

French Style Furs
"All The Way Down"
'Is Exotic Bait'
Frenchkiss, 2014
Notes: "Spurred on by a desire to release music outside of their primary bands [Cold War Kids, We Barbarians]... the trio’s debut album, Is Exotic Bait, was released in July. As both an introductory statement and an album opener, “All The Way Down” succeeds with gusto, arriving boldly and chaotically... “And they said I was gone forever/that I was all the way down in Hell” over rumbling bass, buzzing electronics, and haunting backing vocals..."
(@FrenchStyleFurs)

Hundred Visions
"You’re Gonna Cut Me Loose"
'Spite'
Pau Wau, 2014
Notes: "Texas garage punk outfit Hundred Visions are prepping to release their sophomore album, Spite, on October 28th via Pau Wau. Earlier this year, they let loose their defiant single, “Thanks For Nothing”, and now we’re getting even more of their tenacious spirit with their latest track, “You’re Gonna Cut Me Loose”. The song kicks off quick with sharp guitar lines and harsh, monstrous distortion. It feels like the speakers could blow up at any moment with the band blaring their instruments as much as their gear will permit. Even when the tempo dips slightly after the chorus, vocalist Ben Maddox still sneers with punk rock vitality. Every second of the song blisters relentlessly, from the forceful beginning all the way through the fuzzed-out breakdown at the end."
(@HundredVisions)

Pond
"Waiting Around For Grace"
'Man, It Feels Like Space Again'
Spinning Top, 2014
Notes: "Pond is one of the key figures in the 2010s Perth psychedelic music scene... After Tame Impala’s Innerspeaker brought worldwide attention to that band and their associated groups...in 2013, the band recorded a pair of albums. The first, that summer’s Hobo Rocket, continued the band’s critical success and the second, Man, It Feels Like Space Again, is prepped for a January 2015 release. “Waiting Around For Grace” doesn’t have as much sheer force as many of Hobo Rocket’s songs, but it more than makes up for it in the depth of its textures... Despite being recorded in conjunction with Hobo Rocket, “Waiting Around For Grace” seems more like a progression than a counterpart to those songs, showing the band growing both as songwriters and as studio craftsman who know how to make a song resonate through ways other than sheer volume." It's the third go 'round for Pond on PUTV.
(@PONDband)

Shakey Graves
"House Of Winston"
'And The War Came'
Dualtone, 2014
Notes: "Alejandro Rose-Garcia (aka Shakey Graves) didn’t take the straight path to the country world. He went from playing late-night open mics in New York to joining the underground LA freak folk scene while looking for acting gigs before finally settling in Austin — the perfect setting for his lo-fi Americana... His new LP, And the War Came, slides in and out of clean, foot-stomping folk, lo-fi, freak folk, bluesy rock, and quiet, personal bedroom pop." We heard a live version of "Word Of Mouth" from Mr. Graves back on Episode092.
(@ShakeyGraves)

Yusuf
"Gold Digger"
'Tell 'Em I'm Gone'
Legacy, 2014
Notes: "Tell 'Em I'm Gone is the fourteenth studio album by Yusuf (formerly known as Cat Stevens)... It is Yusuf's third mainstream release since his return to music and his first one since 2009's acclaimed Roadsinger." It is that Yusuf!
(@YusufCatStevens)

Minus the Bear
"Invented Memory"
'Lost Loves'
Dangerbird, 2014
Notes: "With albums as tightly constructed as Minus the Bear's, it's hard to imagine that there's much left over after the recording process is over and done with. Those knotty, intricate albums come at a cost, and songs that once paid the ultimate price in the name of consistency get a second chance on Lost Loves. Resurrecting songs from the recording sessions that spawned 2007's Planet of Ice, 2010's Omni, and 2012's Infinity Overhead, the collection lovingly compiles these nearly forgotten (or at the very least hard to find) gems into what feels more or less like a complete album."
(@MinusTheBear)

Béla Fleck & Abigail Washburn
"New South Africa"
'Bela Fleck & Abigail Washburn'
Rounder, 2014
Notes: "This is not Dueling Banjos: The Married Couple Edition. You won't find the careening energy of the mano-a-mano from the Deliverance soundtrack, or of the Flatt and Scruggs classic "Foggy Mountain Breakdown." Outbreaks of dazzling, speed-demon technique are few. Instead, the first duo recording from Bela Fleck and Abigail Washburn — husband-and-wife banjo adventurers with divergent areas of specialty — is notable for its understated, welcoming calm. Across 11 short, carefully arranged slivers of Americana, Fleck and Washburn explore roots music using the tones and coloration options that arise when two banjos join in conversation."
(@BelaFleckBanjo/@AbigailWashburn)

Pert Near Sandstone
"You're No Good to Me"
'The Hardest Part of Leaving'
self-released, 2014
Notes: "The Hardest Part Of Leaving is evidence that Pert Near Sandstone understand the traditions of the bluegrass genre — they channel old-time bluegrass traditions into a record both modern and timeless. Unlike the work of Minneapolis bluegrass contemporaries Trampled By Turtles, the tracks remain relatively short and centered around the vocalist, recorded with a distinct live feel but rarely focusing on a single player’s musicianship... Piano creeps into “You’re No Good To Me” for a light ragtime feel..." We heard Pert Near Sandstone on Episode052.
(@PertNearMusic)

The Jayhawks
"I’m Gonna Make You Love Me" (Live On KUTX)
'Smile'
American, 2000
Notes: "In the early ’90s, alt-country had its moment in the sun with Uncle Tupelo, Whiskeytown, and the Jayhawks leading the vanguard. Only the Jayhawks are still carrying on, a tremendous achievement given the turnover in the band’s lineup. The co-frontmen Gary Louris and Mark Olson first teamed up in Minneapolis in 1985, intent on writing classic country/pop songs in the vein of the Byrds and the Sir Douglas Quintet. The group’s third album, Hollywood Town Hall, was a minor hit in 1995... Reissues of their first few records came a few years ago, and now the Jayhawks are touring behind reissues of Sound of Lies (1997), Smile (2000), and Rainy Day Music (2003). The tour is an opportunity to put a fresh spin on their back catalog and bring their golden, jangly pop sound to a new generation. Minus original member Mark Olson, the Jayhawks stopped by our Studio 1A for an intimate live performance, and they dusted off the Smile cut “I’m Gonna Make You Love Me”..." I was really into the Jayhawks back in those alt-country days, 'Hollywood Town Hall' is an under-rated classic, IMO!
(@The_Jayhawks)

The Pharmacy
"Masten Lake Lagoon"
'Spells'
Old Flame, 2014
Notes: "Vashon Island’s The Pharmacy was the result of longtime friends...[making] experimental-leaning pop music with a distinctly DIY edge... Across their first four albums – 2005′s B.F.F., 2008′s Choose Yr. Own Adventure, 2009′s Weekend, and 2012′s Stoned and Alone – the trio incorporated lo-fi, psychedelia, garage rock, and ’60s pop into their sound, recording in both full studios and on basic four-tracks not unlike the ones they used at the beginning of their career. The band’s fifth album, the confident and crunchy Spells, also happens to be the band’s final album – the band announced their split and final show the week before the record’s release. “Masten Lake Lagoon” is a snarling, miniature piece of that swan song that rips with what’s retrospectively the band’s last gasp of energy... Not unlike the group themselves, it’s a blurry, melodic song that shines brightly until its wheels fall off."
(@PharmacyTweets)