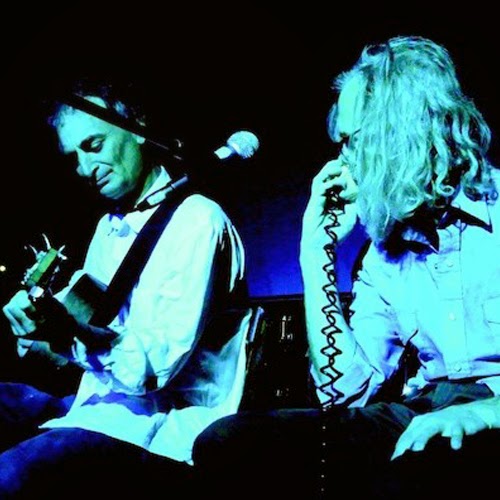 Allah-Las
"501-415"
'Worship The Sun'
Innovative Leisure, 2014
Notes: "L.A. garage psych revivalists the Allah-Las didn't mess around with their winning formula much on their second album, 2014's Worship the Sun. Working with retro-leaning producer Nick Waterhouse again, the quartet can still effortlessly crank out chiming ballads that sound worthy of a strong volume of Pebbles, dish out moody midtempo tracks that have the feel of classic West Coast bands...and take the occasional instrumental detour that come off like surf music that's been dragged through some desert dust." Making their fourth PUTV stop with a second song of the second album.
(@AllahLas)

Dream Police
"Hypnotized"
'Hypnotized'
Sacred Bones, 2014
Notes: "Mark Perro and Nick Chiericozzi are best known for their [Brooklyn] band the Men — who already released a great album earlier this year — but they’ve got another project, the electronic-leaning Dream Police, with an album on the way. What does an electronic-minded project from some dudes in the Men end up sounding like? Based on the title track from their upcoming Hypnotized, it sounds like an ass-kicking rock band. Here Perro and Chiericozzi supplement their rough guitars with a Roland 707 drum machine and a Juno 106 synthesizer, which provide a heavy thump and a shrieking pierce, respectively. Throw in Perro’s vocals and you’ve got something that’s certainly leaner but no less fierce than their other band."
(#DreamPolice)

Springtime Carnivore
"Name On A Matchbook"
'Springtime Carnivore'
Autumn Tone, 2014
Notes: "The Los Angeles based vocalist has finally announced details of her self-titled debut album, out on 3 November via Aquarium Drunkard imprint Autumn Tone Records. It features her new song 'Name on a Matchbook'...it's got a massive whistling hook and has her signature smoky, seductive vocals, so you're bound to fall in love with it." She's also been touring with Of Montreal and Generationals.
(@SpringCarnivore)

History of Apple Pie
"Tame"
'Feel Something'
Marshall Teller, 2014
Notes: "The History Of Apple Pie released a new single called “Don’t You Wanna Be Mine?” last fall, but at that point information about the London indie-pop band’s sophomore LP was scarce. Almost a year later, that information has emerged. The group will release Feel Something this fall, and “Tame” is its official lead single. It’s an intense, piano-pounding psych-pop track, visceral yet somehow atmospheric too." We heard this strangely named band last December when they were on their debut full-length.
(@THOAPband)

Magna Carda
"Game Like Jimmy"
'Like It Is'
self-released, 2014
Notes: "Magna Carda’s laid-back vibe masks a rapidly evolving Austin group... With references to Van Gogh, Chuck Close, and a challenge to Jay Z’s “99 Problems,” it’s obvious that Magna Carda aren’t content to stay just an Austin phenomenon... Now comes Like It Is, Magna Carda’s second release of the year, buoyed by “Game Like Jimmy.” It’s a characteristically low-key production, but Kelli still swaggers, proclaiming that she’s a leader not a follower. We couldn’t agree more." We heard Magna Carda back on Episode098, which featured a host of Austin indie hop!
(@MagnaCarda)

HOLLY
"Easy Company/Interlude"
'Maps and Lists'
Outer Sunset, 2014
Notes: "El Paso born artist and former Aviettes member Holly Muñoz, a.k.a. HOLLY, left her job to pursue a solo career. Muñoz’s risk paid off in the successfully crowdfunded album Maps and Lists. Muñoz even grabbed the attention of producer and musician John Vanderslice to work on the release. The album features sounds ranging from the drums to the glockenspiel. While Muñoz seems like a pretty straightforward person, her enigmatic lyricism stands out in “Easy Company | Interlude.”... True to her ambitiousness, Muñoz created the record label Outer Sunset to support independent musicians. She is already recording a new album with John Vanderslice and plans on playing more shows in 2015."
(@iAmOnTeamHolly)

Meatbodies
"Mountain"
'Meatbodies'
In The Red, 2014
Notes: "If you’re like us and can’t get enough of the LA garage rock scene — Ty Segall, King Tuff, Mikal Cronin, Thee Oh Sees (John Dwyer just relocated there), and many others — you’re definitely going to want to hear Meatbodies. Formerly Chad and the Meatbodies, the LA band started as a project of Chad Ubovich, a bassist and guitarist who’s backed Cronin on tour and joined Segall in Fuzz. For his own self-titled debut, Ubovich sought producer Eric Bauer (Ty Segall, Thee Oh Sees, White Fence, Sic Alps) to catch his fiery licks and sharp hooks and even enlisted Segall himself play drums on a few tracks... Prepared to leave your own meatbody behind in the mind-bending space of Meatbodies."
(@Meatbodies)

Weyes Blood
"Land of Broken Dreams"
'The Innocents'
Kemado/Mexican Summer, 2014
Notes: "In the midst of a revived interest in folk music, Weyes Blood stands out as one of the wave’s more singular torchbearers... Behind the Flannery O’Connor-referencing moniker is (now) Brooklyn-based songwriter Natalie Mering, who spent time as a member of Jackie-O Motherfucker and the backing vocalist on Ariel Pink’s Haunted Graffiti’s Mature Themes. Mering refocused her efforts as a solo artist in 2011, releasing her debut The Outside Room via Bandcamp, and as she subsequently traveled across the United States, she captured those experiences in songs that would eventually form her debut album, this year’s The Innocents. The Innocents opens with “Land of Broken Dreams”, a song that flips the title of a song from the quintessential American songwriter to find the country ever at war with itself."
(@WeyesBlood)

Ethan Azarian & Jeff Johnston
"Never Slow Down"
'Farmhouse Recordings'
self-released, 2014
Notes: "Even if you don’t know the musician Ethan Azarian, you’ve probably seen his visual work around [Austin]. The artist has painted murals at restaurants, apartment complexes, schools, and more. They’re filled with vivid colors and a sense of humor...and Azarian brings this same ramshackle charm to his music. In 2005, he started playing around town with Jeff Johnston – a fellow local musician who’s spent time in Li’l Cap’n Travis and Azarian’s Orange Mothers – and the duo finally have a debut album to their names."
(#EthanAzarian)

Shakey Graves
"Big Time Nashville Star" (w/ Esmé Patterson)
'And The War Came'
Dualtone, 2014
Notes: "Alejandro Rose-Garcia is known for his work as Shakey Graves. While the Austin artist made his debut as a one-man band, he’s added other players and top notch singers on his recent release." It's the third go 'round for Shakey on PUTV as his star continues to rise!
(@ShakeyGraves)

Father John Misty
"Bored in the USA"
'I Love You, Honeybear'
Sub Pop, 2015
Notes: "A biting spin on Bruce Springsteen's "Born In The U.S.A.," "Bored In The USA" is a scathing takedown of the mindless materialism and overmedicated emptiness that has come to define the lives of far too many Americans... Father John Misty's voice, and the song's swing from melancholy minor chords to uplifting majors, recalls the wistful story songs of Randy Newman and Harry Nilsson. It's a tragic tune, but also a painfully comical one, particularly when Father John Misty fades in the sound of a studio audience laughing callously at his tale of woe. Brilliant and beautiful, but also brutal, "Bored In The USA" is a fitting anthem for a nation hobbled by its own shortcomings as it limps toward the end of 2014." FJM (who we played on the very first PUTV) had one of the best songs of 2013 with "I'm Writing a Novel" (Episode067) and he seems like the former Fleet Fox is just getting started!
(@FatherJohnMisty)

Shaprece
"Her Song"
'Molting EP'
self-released, 2014
Notes: "Influenced by a mix of trip-hop, 90s R&B, and sweeping orchestral arrangements, Seattle’s Shaprece has been compared to artists like FKA Twigs and Little Dragon in her fresh approach to genre blending. Shaprece’s second release, Molting EP, features collaboration with local producer IG88 as well as composition and arrangement work from Daniel Butman and Phillip Peterson... “Her Song,” released earlier this year, is a subtle testimony to Shaprece’s uncluttered style."
(@Shaprece)