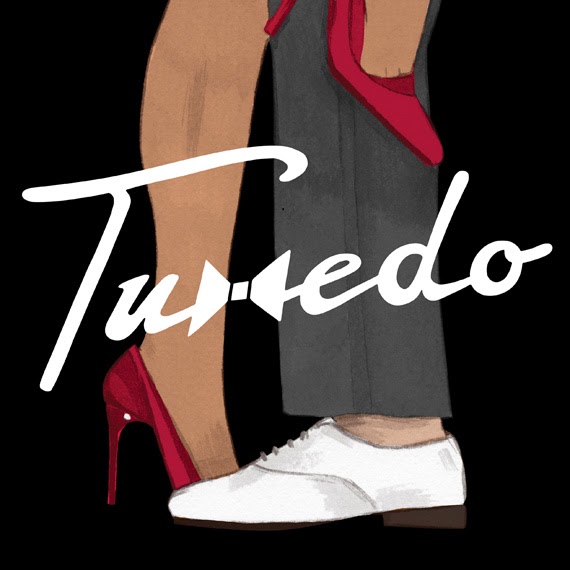 @PumpUpThaVolume: Episode140 – Do It

Tuxedo
"Do It"
'Tuxedo'
Stones Throw, 2014
Notes: "Tuxedo emerged last year with three tracks of smooth, synth-heavy, disco funk, and accompanied by no information whatsoever about the group except a greeting – “Tuxedo is here! Stay classy.” Some speculate that this is the work of Mayer Hawthorne and Jake One. Judging by Hawthorne’s cameo in this new video for “Do It” we might assume either that the rumors are correct, or that he has moved into the valet industry." Their full-length drops on 3/3.
(@Tuxedo)

Springtime Carnivore
"Sun Went Black"
'Springtime Carnivore'
Autumn Tone, 2014
Notes: "Springtime Carnivore is the musical alter-ego of Greta Morgan, whose psychedelic take on pop goes beyond the hazy vocals and catchy beats for a sound that’s danceable without lacking in depth. Her...debut was produced by Richard Swift (Foxygen, The Black Keys, The Shins)... Check out “Sun Went Black,” the debut single..." We heard "Name On A Matchbook" from the L.A.-based singer three weeks ago on Episode137.
(@SpringCarnivore)

Owen Pallett
"The Riverbed"
'In Conflict'
Domino, 2014
Notes: "With "The Riverbed," I wanted to have this consistent E-flat V chord, just this E-flat and B-flat repeated over and over again, to create this almost monomaniacal quality that the song was not really gonna go anywhere. And then as the song goes on, the bass descends and the violins go up, and eventually the orchestra comes in at the end, [so the song is] starting from one point and diverging outward in both directions. It was meant to sound almost as if you were seeing curtains open up very, very slowly." And that's how the Oscar-nominated and sometime-Arcade Fire/Caribou member describes the anthemic song "The Riverbed" from his second full-length under his own name, and not Final Fantasy.
(@OwenPallett)

Smokey Brights
"If I Can't Change Your Mind"
'Taste For Blood'
self-released, 2014
Notes: "Smokey Brights is a [Seattle] 5 piece band, recognized for their vintage folk rock, who released their first full length album this year. Determined to capture the harmony of their live performances and realize singer Ryan Devlin’s fantasy of recording in a barn, the band set up in Carnation, WA to record Taste for Blood. Smokey Brights brought in members of neighboring retro-pop band Radiation City from Portland to produce the album."
(@SmokeyBrights)

Museum of Love
"The Who's Who of Who Cares"
'Museum of Love'
DFA, 2014
Notes: "Museum of Love — the duo comprised of former LCD Soundsystem drummer Pat Mahoney and Dennis “Jee Day” McNany of The Juan MacLean — will release their self-titled debut album...via DFA Records. Already we’ve heard a few of the LP’s tracks, including...“In Infancy”. Now, the two-piece have unveiled “The Who’s Who of Who Cares”. Outfitted with throbbing grooves and the bold bellowing of trumpets, the funky number sounds like a dazzling cross between a disco anthem and New Orleans brass band standard. If it sounds familiar, it’s because Museum of Love had previously teased the track in an album trailer back in June." For the second week in a row, we get some post-LCD action from Museum of Love!
(@MuseumOfLove)

Talk In Tongues
"Still Don't Seem To Care"
'Talk In Tongues'
Fairfax, 2014
Notes: "There are a lot of bands that straddle the lines of psych-rock and garage rock—it's difficult being a group who does one without the other. But there are artists like Tame Impala who've successfully walked the difficult line of being a high-fi, well-produced, and straight forward psych band. Now, we've found another one. Meet Talk In Tongues, a four-piece from LA and your newest favorite psych-rock band... “Still Don’t Seem To Care,” a glistening piece of psych-rock perfection that will get stuck in your head for the rest of the day. This is music meant to blare out of the speakers of Glastonbury at midnight while you dance."
(@Talk_In_Tongues)

ELEL
"40 Watt"
Mom+Pop, 2014
Notes: "To attempt to slap genre boundaries on Nashville eight-piece band ELEL’s shimmering, stomping “40 Watt” is the sort of writer’s exercise that likely limits the breadth of the bands inspiration... Consisting of, as they describe it, “two horns, two drums, three keys , guitar, bass and whole lot of vocals,” the group nicely translates their unusual configuration into something surprisingly cohesive and, put simply, fun. Packed to the brim with sounds, simultaneously feeling modern and nostalgic (there’s a haziness reminiscent of Tame Impala), “40 Watt” shines and burrows its way into your brain–even if the lyrics are obscured by warming reverb and echo. ELEL deftly serves up bright energy, providing the perfect accompaniment for those seeking an off-kilter sunshine anthem."
(@ELELmusic)

Laura Mvula
"Green Garden/See-Line Woman" (Live On KUTX)
'Sing To The Moon'
RCA Victor, 2013
Notes: "There's simple pleasure in Laura Mvula music. Her debut album, Sing To The Moon, is filled with retro soul and pop influences that make it hard to place her in a given time... Mvula stopped by our Studio 1A earlier this year and showed us that her songs bloom even further in the live setting. Her electric performance of Green Garden grew into a cover of Nina Simone's "See-Line Woman" past and present converging seamlessly." We first heard Laura Mvula with the title track to her 2013 debut 'Sing To The Moon' back on Episode057. And if you want a real treat, watch the live performance of these songs on the KUTX YouTube channel.
(@LauraMvula)

Daniel Lanois
"Opera"
'Flesh And Machine'
ANTI-, 2014
Notes: "Music fans know Daniel Lanois for his production work with big pop artists like U2, Willie Nelson and Bob Dylan, but from time to time, he steps out from behind the decks to release his own work... his eighth solo album “Flesh and Machine,” an 11-song set that features him alongside bassist Jim Wilson and jazz drummer Brian Blade. As Lanois explains it, the record started out as an exploration in Brian Eno-esque ambiance, but quickly morphed into a different sonic beast."
(@DanielLanois)

Leopold & His Fiction
"Waves (Golden)" (Live On KUTX)
Native Fiction, 2014
Notes: "With their fuzzy guitar riffs, gruff but compelling vocals, and narrative lyrics, [Austin's] Leopold & His Fiction sounds a bit like The White Stripes or Jet, with traces of The Who or The Stooges. While the sound is certainly expansive, Leopold & His Fiction also manages to exude a certain kind of folk-tinged, backwoods charm that makes them much more than just a straight up rock-and-roll band."
(@LeopoldFiction)

Nikki Lane
"FaLaLaLaLove Ya"
'An Americana Christmas'
New West, 2014
Notes: "It's good to toss on hot Christmas songs early in the season, before repetition burns off their energy. Add to the proverbial fire the wonderful "FaLaLaLaLove Ya," a new potential standard by Nashville singer Nikki Lane. A torch song among many gems found on the new collection "An Americana Christmas," "FaLaLa ..." is as smoothly delivered as polished chrome. "If I had my way there'd be mistletoes every day," sings Lane as a tom-tom beat echoes behind her and a pedal steel guitar moans. Who's to argue?" Making her third appearance on PUTV is one of 2014's breakout stars!
(@NikkiLaneMusic)

Murder Vibes
"Not Alone Tonight"
'Murder Vibes'
self-released, 2014
Notes: "Of all the moods to seek out in music, morbid is not at the top of most people’s list. Despite their hair-raising name, Murder Vibes can be surprisingly soothing. The Seattle duo’s self-titled debut is macabre yet alluring with atmospheric, electronic production and sweeping vocals that evoke a more reserved take on early Bono. Murder Vibes’ sinister electronic rock is the result of producer/singer combination Jordan Evans and Peter Hanks. Hanks’ vocals tower over 80’s influenced digitally constructed beats like those in “Not Alone Tonight.”" And our closer band for 2014 (most likely... I might be able to bang out ep141 before NYE, but don't bet on it), is local and indie - they way it should be!
(@MurderVibes)