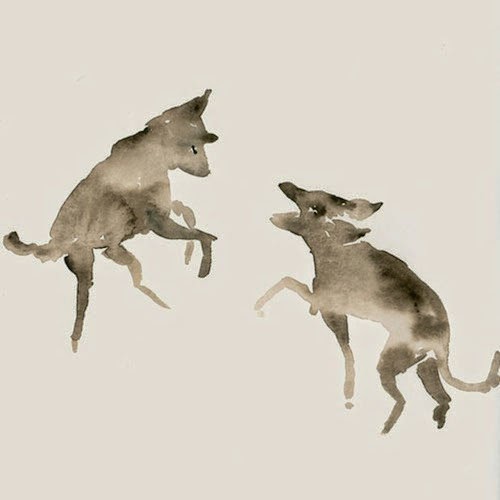 Cult of Youth
"God's Garden"
'Final Days'
Sacred Bones, 2014
Notes: "Across the past seven years, Cult of Youth has progressed from a solo bedroom project to a vital, neofolk band with both a commanding leader and equally as ferocious performances. Brooklyn-based...band’s fourth and latest album, 2014’s Final Days, is their most vivid outing to date, built with more fury and pace than any of the band’s previous work. “God’s Garden” exemplifies the band’s newfound drive, moving at a relentless speed..." Damn if that doesn't sound like Spencer from Murder City Devils on vocals!
(#CultOfYouth)

Motopony
"Daylight’s Gone" (Live On KUTX)
tinyOGRE, 2014
Notes: "It’s been a long, strange road for Motopony. The Seattle band turned heads way back in 2011 with their self-titled debut, buoyed by the strength of single “King Of Diamonds.” But since their formation in 2006, frontman Daniel Blue has been the lone constant... After solidifying a core of six members this past year, Motopony is picking up the tempo again. They toured India and released two EPs in 2014... Austin’s Mike McCarthy–who’s lent his expertise to Spoon and Heartless Bastards–produced Motopony’s full-length, which is expected just before SXSW. In the meantime, the band has been trying out material on the road, and they stopped by Studio 1A late last year." And we heard "Get Down" from Motopony last October on Episode130.
(@Motopony)

Holiday Friends
"Astral Observations"
'Major Magic'
self-released, 2014
Notes: "Although Astoria, Oregon is best known to multiple generations of pop-culture observers as the cinematic setting of the ‘80s cult classic The Goonies, the rugged riverfront city now has another distinction: as the home of the fab new pop-rock combo known as Holiday Friends. On its consistently uplifting debut album Major Magic, the spirited quintet...deliver ten joyous new tunes that strike a decisive blow for the enduring values of infectious melodic hooks and emotional engaging lyrics. The band’s catchy, playful songs are refreshingly free of hipster cynicism, and has been described as what the Beach Boys might sound like if they’d been raised in the Pacific Northwest on a steady diet of John Hughes film soundtracks, or what The Cars might be doing if they lived at Big Pink."
(@HolidayFriends)

Yellerkin
"Tools"
self-released, 2014
Notes: "Yellerkin is the duo of Adrian Galvin and Luca Buccellati, Brooklyn pop experimentalists who seem to have ingested Animal Collective and Passion Pit in equal measure. “Tools,” their new single, brings a wanton, whimsical spirit to bold, bright synthpop, veering through a handful of twists and turns en route to its big finish. “You don’t have the tools to realize God won’t talk to you,” they sing."
(@Yellerkin)

Bonobo
"Flashlight"
'Flashlight EP'
Ninja Tune, 2014
Notes: "Bonobo, aka Brighton producer Simon Green [and his]...Flashlight EP arrives as the bitter winter winds howl in... Its three tracks differ in sonic texture enough to provide a welcome sense of variety... The title track, whilst equipped with a near-pounding beat, is arguably one of the most blissful things you’ll hear this year, as looped guitar licks waltz with restrained-siren synths." Bonobo makes his second appearance on PUTV after we first heard him on Episode061.
(@SiBonobo)

Dark Rooms
"Beyond The Lens"
'Dark Rooms'
self-released, 2013
Notes: "Daniel Hart’s eclectic resume points towards his collaborative nature. The Dallas native earned a music degree at SMU and cut his chops in a jazz band as a violinist. Soon, Hart was lending his talents to St. Vincent, the Polyphonic Spree, John Vanderslice, and Broken Social Scene while sharing bills with Radiohead and Andrew Bird... Dark Rooms takes Hart’s craft for composition and dips it in darkness. “Beyond The Lens,” from the band’s self-titled debut, takes its cues from moody electro-pop, with Hart’s strong voice front-and-center."
(@DarkRoomsMusic)

Eliot Lipp
"The Western" (w/ Cherub)
'Watch The Shadows'
Pretty Lights, 2014
Notes: "Eliot Lipp is a rising star hailing from the electronic music epicenter of Brooklyn, New York. This Pretty Lights Music protege is blazing his own path with a sound and style all his own. Eliot already has a substantial and vastly diverse musical catalogue that has established him as one of electronic music brightest talents. With his newest [fifth?] album, Watch The Shadows, Eliot has embarked on a new chapter of his career, bound to solidify his standing as one of the most exciting names in dance music."
(@EliotLipp)

Ty Segall
"Music For A Film"
'$ingle$ 2'
Drag City, 2015
Notes: "Prolific musician Ty Segall released two albums in 2014. $ingle$ 2 is a collection of non-album singles and B-sides from three of his previous releases, as well as some covers." This one had an original release a few years ago, but now it's back and bigger than ever as Ty Segall makes only his second stop on PUTV. (Though he's been a b-side more than a few times!)
(@TySegall)

Walker Lukens
"Every Night"
'Baked Goods'
TBA, 2015
Notes: "Led Zeppelin and the Four Seasons don't often meet in the same song, but singer/songwriter Walker Lukens namechecks both legendary groups as infleunces on his excellent new strutter "Every Night." The single, from Lukens' upcoming second LP, Baked Goods, mixes Frankie Valli-style doo-wop — down to the snaps — with a Spoon-like nocturnal groove and a "How Many More Times"-esque Zep outro. (The former influence makes a good deal of sense, considering Spoon drummer Jim Eno produced the song.) For a track that works with such a wide swath of influences, "Night" still ends up surprisingly coherent and not even explicitly retro-sounding, a testament to Lukens' confidence as a writer and performer." We heard "Lover" from Mr. Lukens on Episode101.
(@WalkerLukens)

Phosphorescent
"Nothing Was Stolen (Love Me Foolishly)"
'Live At The Music Hall'
Dead Oceans, 2015
Notes: "On February 17th, Phosphorescent will release Live at the Music Hall, featuring recordings from the singer’s December 2013 residency in Williamsburg, Brooklyn... Matthew Houck further previews the release by unveiling his inspired rendition of “Nothing Was Stolen (Love Me Foolishly)”. Though it retains the same structure and progression as the album version, the song bubbles with new life in the live setting: Houck’s croon burns much more earnest and sentimental, while the swelling organ really drives home the boundless romantic energy."
(@Phosphorescent)

The Weather
"1983"
'Waters Electric'
self-released, 2015
Notes: "As The Weather... [the Seattle musicians] take the atmospheric songwriting skills they honed under the name Campfire OK and reconfigure them into vibrant, electric rock songs... In late 2014, the band announced that the band’s moniker would change to The Weather, attributing the name change to a change in style and sentiment in the band’s music. “1983”, the first single from the newly rechristened band, is a dense, layered pop gem... “1983” is not only a shimmering slice of electric pop that sounds great in any year, but also a resounding, brilliant reboot for the band." Hey, we played Campfire OK way back on Episode029!
(@TheWeatherBand)