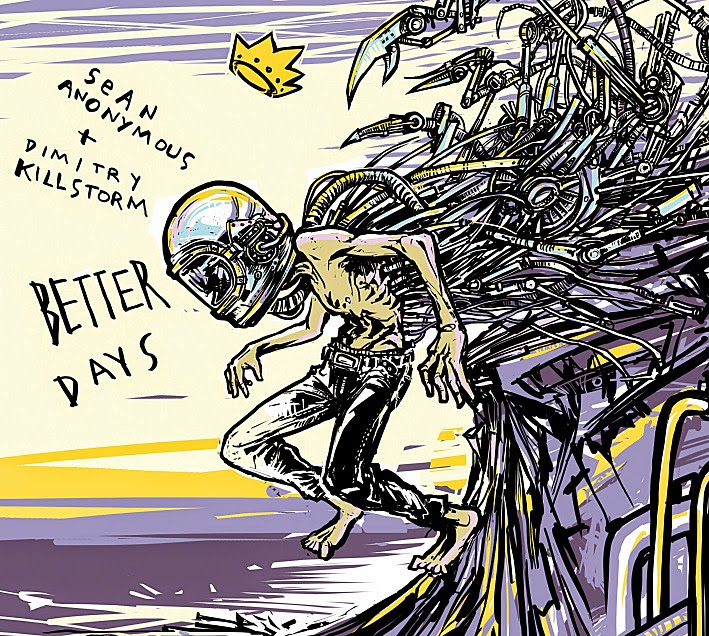 Surfer Blood
"Point of No Return"
'1000 Palms'
Joyful Noise, 2015
Notes: "Beloved band Surfer Blood wrote and recorded their third album, 1000 Palms, entirely at home. The collection features the track "Point of No Return," which was inspired by guitarist Thomas Fekete's plight with cancer and showcases his fine guitar work." It's Surfer Blood's fourth time on the show and second song from their latest record.
(@SurferBlood)

The 4onthefloor
"All My Friends"
'All In'
self-released, 2015
Notes: "What should one expect from a 4onthefloor show? When answering such a question, the Minneapolis band's guitarist and singer Gabriel Douglas doesn't mince words. "It's going to be fierce and ferocious and fun and welcoming," said the well-bearded frontman. "Sometimes you see a tornado and you don't want to get near it — but this is a friendly tornado." ... Their third LP, "All In," is set to arrive later this month. It's the follow-up to 2013's "Spirit of Minneapolis" and "4x4," their 2011 debut. A Kickstarter campaign that wrapped in April raised more than $11,000 to help make the new record (in its physical form, at least) and the coming tour a reality." We first heard 4onthefloor way back on Episode017, nearly three years ago!
(@4otf)

Sweet Spirit
"I’ve Made Up My Mind"
'Sweet Spirit' EP
Nine Mile, 2015
Notes: "Sweet Spirit snared local [Austin] producer extraordinaire Mike McCarthy (Spoon, Heartless Bastards, …And You Will Know Us By The Trail Of Dead) for the EP plus a forthcoming LP. On Sweet Spirit, the group whips through a fiery combination of garage rock, doo-wop, country, and ska, all anchored by Ellis’s commanding voice... “I’ve Made Up My Mind” stands out by perfectly demonstrating Sweet Spirit’s appeal: it’s loud, it’s fun, and it’s catchy as hell." We heard Sweet Spirit a few weeks ago on Episode157 with a song they did with Britt Daniel of Spoon.
(@SweetSpiritBand)

Other Lives
"Easy Way Out"
'Rituals'
TBD/ATO, 2015
Notes: "Other Lives released their sophomore album Tamer Animals some four years ago. Since then, they’ve won a fan in Thom Yorke, released an EP, reduced their numbers to three, and moved from Stillwater, Oklahoma to Portland, Oregon. All of that — especially their new home — has impacted their latest effort, Rituals... Though the band has shrunken in size, it’s grown exponentially in sound. Horns and strings were present in past efforts, to be sure, but the lushness in which they’re presented on Rituals is entirely new. Some of that is no doubt due to the presence of Atoms for Peace drummer Joey Waronker as co-producer, but most credit falls on the trio’s immense instrumental talents." It's Other Lives third spin on the show.
(@OtherLives)

Kopecky
"Talk To Me"
'Drug For The Modern Age'
KFB/ATO, 2015
Notes: "The Nashville based six-piece formerly known as the Kopecky Family Band will make a striking return with a succinct new name — now simply Kopecky — and a triumphant sophomore album. Titled Drug for the Modern Age, the follow-up to their 2012 debut album Kids Raising Kids will be released May 19 on ATO Records, with production by Konrad Snyder (whose credits include working with Milo Greene and Night Beds)." We last heard these guys when they were still a "Family Band" back on Episode038 in 2012.
(@KopeckyMusic)

Mylko
"Animal"
'Contrast'
Reverbatim, 2015
Notes: "Mexico City-based Mylko are two multi-instrumentalist producers in their mid/late 20's. Influenced by artists such as James Blake and Flying Lotus, they have a debut due in Fall. Here is a sample. "Animal,” from their forthcoming CD, Contrast."
(@MylkoMusic)

Miami Horror
"Real Slow"
'All Possible Futures'
Dine Alone, 2015
Notes: "For a band so steeped in Australian, bush-brined sugar-pop, Miami Horror show a better understanding of American Top 40 than many of our own homegrown mainstream acts. Helmed by Benjamin Plant — who started MH as a solo project in 2007 — the now-four-piece spends much of sophomore album All Possible Futures catering to the synthetic hooks that pop listeners demand, but in a way that unsubtly demonstrates their aching for something, anything new — whatever the cost."
(@Miami_Horror)

Rainy Milo
"Deal Me Briefly"
'This Thing of Ours'
Big Picnic, 2015
Notes: "London teenager...Rainy Milo put out her first song, "'Bout You," when she was just 15. Two years later, Milo has released an EP, Limey, and collaborated with Aussie producer Chet Faker. A debut album is, of course, in the works."
(@RainyMilo)

Holly Miranda
"All I Want Is to Be Your Girl"
'Holly Miranda'
Dangerbird, 2015
Notes: "“We could fuck in the sun and dance till dawn,” Holly Miranda sings in a matter-of-fact, filtered vocal on “All I Want Is To Be Your Girl,” stripped of all the qualms and metaphors that usually render most pop song propositions toothless. Given that kind of kick off, the song hums with fierce self-knowledge, the kind that empowers you to love someone without any reservations... a fascinating balance of country determination and lusty pop,...what Miranda found when she holed up in Joshua Tree to write her self-titled third album..."
(@HollyMiranda)

Hop Along
"Waitress"
'Painted Shut'
Saddle Creek, 2015
Notes: "The Philadelphia-based band Hop Along is getting its national breakout moment with Painted Shut (out May 4), its second full-length and first for Saddle Creek Records. Hop Along's power rests squarely on the talents of lead singer and writer Frances Quinlan. Her voice is huge: urgent, dynamic, sometimes harsh but undeniably intense. Get into it and you'll live and die by her reflective, first-person stories in songs like "Waitress." The words here stem from places of frustration and occasional darkness, but the music is pure, headlong joy."
(@HopAlongTheband)

Sean Anonymous
"Big Bang" (w/ Dimitry Killstorm, Lizzo and P.O.S of De La Soul)
'Better Days'
self-released, 2015
Notes: "...a premiere from [Minneapolis] rapper Sean Anonymous and local producer Dimitry Killstorm, who teamed up with Lizzo and P.O.S for "Big Bang." Better Days is Sean Anonymous' first full length album." The boys are all new to us but this is at least Lizzo's fourth bow on PUTV; we saw that powerful princess of rhyme open for Har Mar Superstar last year!
(@SeanAnonymous)

Saun & Starr
"Look Closer (Can't You See the Signs?)"
'Look Closer'
Daptone, 2015
Notes: "For many years, New Yorkers Saundra Williams and Starr Duncan Lewis were backing vocalists for Sharon Jones as The Dapettes before Daptone decided to bring them into the spotlight. It was a canny move: Williams and Lewis possess voices that send these soulful, gospel-tinged tunes into the stratosphere. The material, as you’d expect from the home of Sharon Jones and Charles Bradley, is vintage in tone and timber, but the duo’s mix’n’match of the material is invigorating."
(@SaunAndStarr)

Sleater-Kinney
"Surface Envy"
'No Cities To Love'
Sub Pop, 2015
Notes: "If anything, this is an even better Sleater-Kinney song than “Bury Our Friends”: A fired-up, full-bodied howler powered by righteous fury and beautifully tangled riffage. The world does not deserve to hear Corin Tucker in roaring-lion form like this, but we’re getting it anyway. Give thanks..." It's the local legends Sleater-Kinney's second spin on the show as they kick off their sold tour behind the new album!
(@Sleater_Kinney)