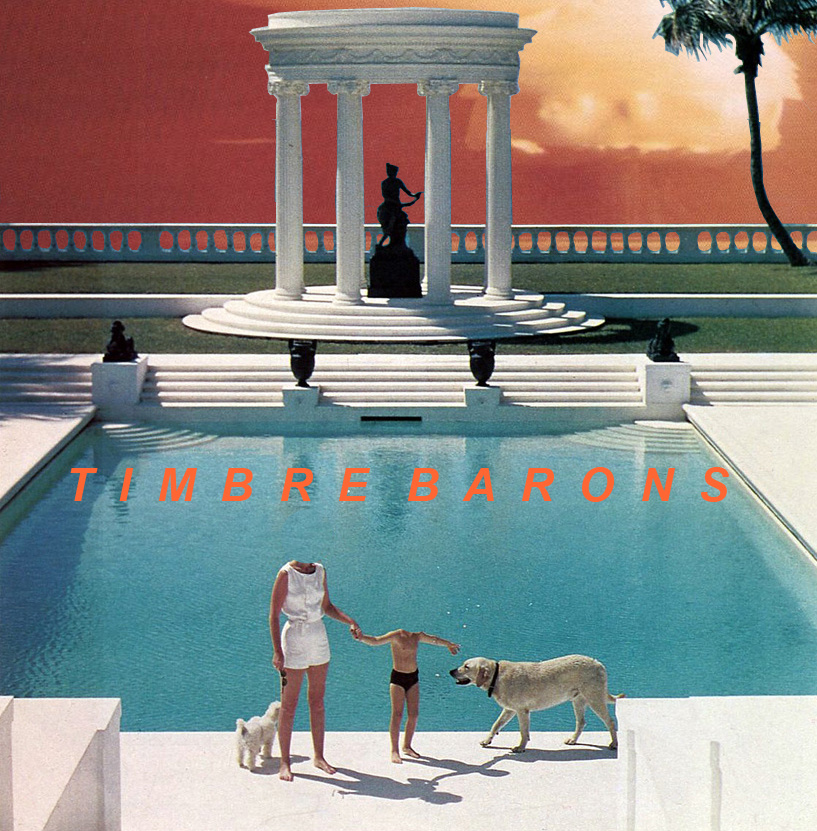 Previous: Episode162 - Do The Get Down

San Cisco
"Run"
'Gracetown'
Island City, 2015
Notes: "Having released their current album ‘Gracetown’ in April... The band have previously toured with the likes of The Vaccines and Darwin Deez and have spent much of the last year touring. New album ‘Gracetown’ saw San Cisco collaborate with Steven Schram to help take their delightful indie-pop jangles to the next stage... The album was also released from the Perth band’s own record label Island City Records.
(@SanCiscoMusic)

AM & Shawn Lee
"Cold Tears"
'Outlines'
AMSOUNDS, 2015
Notes: "The transatlantic duo of AM & Shawn Lee are, like Reese's Peanut Butter Cups, two great tastes that taste great together! Their distinct musical talents come together once again to make a record greater than the sum of its parts." We heard AM & Shawn Lee together two times before.
(@AMSounds/@ILoveShawnLee)

Boxed In
"Mystery"
'Boxed In'
Nettwerk, 2015
Notes: "Oli Bayston already has enormous experience behind him. The songwriter has credits with The 2 Bears, George FitzGerald, The Voyeurs and more, with Bayston now focussing on his solo work. Utilising the name Boxed In, the songwriter fuses blissful electronics with a very English sense of the psychedelic. Debut album 'Boxed In'... It's a curious introduction. Whimsical and dreamy songwriting, Boxed In's production is idiosyncratic yet welcoming."
(@BoxedInUK)

Underworld
"Baby Wants to Ride" (Underworld Vs Heller & Farley - Radio Edit)
'Baby Wants to Ride'
Junior Boy’s Own, 2015
Notes: "Last year, we lost the great house music pioneer Frankie Knuckles. And on a new song, a crew of dance-music all stars have teamed up to pay Knuckles tribute by knocking out a new version of his iconic 1987 Jamie Princible collab “Baby Wants To Ride.” For the new single, Underworld have teamed up with fellow dance veterans Heller & Farley and the Misterons, and the new version wraps some of the slow-burn intensity of the original up in mid-‘90s rave sonics. All the proceeds from the single are going to the AIDS-fighting Frankie Knuckles Fund, which the Elton John AIDS Foundation established in Knuckles’ name."
(@UnderworldLive)

Small Wigs
"Hangdog"
'New Wig'
Mock, 2015
Notes: "L.A.’s Small Wigs are the brainchild of FIDLAR’s Elvis Kuehn and Mikki Itzigsohn of Isaac Rother & The Phantoms. The group’s frenetic, SST-nodding punk has won them opening gigs with Mike Watt, the Flesheaters, and the King Khan & BBQ Show, and their debut 7” completes the circuit, snipping a bit of the Gun Club’s twangy swagger and filtering it through a D. Boon guitar strut. You can cop “Hangdog”/“New Wig” on Mock Records..."
(@SmallWigs)

Calvin Love
"I Wanna Know"
'Super Future'
Arts & Crafts, 2015
Notes: "Only once with every blue moon comes an artist that seems so familiar yet out of space as Calvin Love. On Super Future, his first album for Arts & Crafts, the young charmer from Edmonton, Alberta, steeps songs of psychedelic wisdom in celestial sensuality..."
(@CalvinLoveMusic)

angelic milk
"IDK How"
PNKSLM, 2015
Notes: "Angelic Milk is the project of 17-year-old Sarah Persephona from St. Petersburg, and “IDK How” is her charming new single. It’s an intoxicating track, carefree except not, determined yet holding back... still susceptible to the kinds of mood swings that we all get during adolescence: “Yesterday I thought I was alright, and now I wanna feel like Miss Universe.” And she’s willing to leave it all behind if it feels right: “Take me away to the world of yours, and let’s forget forever who we really are.” Wrap all of that up with a catchy, anthemic hook, and you’ve got yourself a great song."
(@AngelicMilk666)

PINS
"Too Little Too Late"
'Wild Nights'
Bella Union, 2015
Notes: "There’s a clear pop influence that runs through the currents of Manchester’s PINS, but the quartet’s music takes that core and runs it through punk, garage, and noise filters to add some edge to their melodic tunes... On their 2013 debut, Girls Like Us, the band emerged amidst a flurry of buzz in the UK with a gritty set of tunes, but after retreating to Rancho De La Luna with producer Dave Catching (Queens of the Stone Age, Arctic Monkeys) for their second album, this year’s Wild Nights showed a more sparkling, melodic side of the band. “Too Little Too Late” certainly taps into that shimmering punch, and it does so without letting up on the band’s icy sneer. "
(@WeArePins)

Eternal Summers
"Together Or Alone"
'Gold and Stone'
Kanine, 2015
Notes: "After recording their first two albums close to home in Roanoke, Virginia, indie rock trio Eternal Summers ditched the Blue Ridge Mountains for Austin’s Lady Bird Lake to cut 2014’s polished and honed LP, The Drop Beneath. Stepping outside their geographic comfort zone and enlisting producer Doug Gillard (Guided By Voices, Nada Surf) proved to be a wise move; whereas their initial offerings show a band still striving to find its voice, last year’s album sounded suave and poised. And they’ve apparently taken a liking to their home away from home: The band returned to Resonate Studio in Austin for their self-produced fourth album, Gold and Stone." We haven't heard from Eternal Summer since Episode013 three years ago?!
(@EternalSummers)

Kopecky
"Talk to Me"
'Drug For The Modern Age'
ATO, 2015
Notes: "The Tennessee six-piece Kopecky — formerly known as the Kopecky Family Band — are back with their sophomore album, Drug for the Modern Age, a collection of melodic tunes that prove pop can be deeply intimate and fiercely energetic at the same time." It's my new buddies Kopecky back for a third spin on PUTV!
(@KOPECKYmusic)

Grassy Knoll
"Headlong Into The Sun" (Instrumental)
'Electric Verdeland, Vol. 1'
Electric Verde, 2015
Notes: "The Grassy Knoll—KUTX’s Artist Of The Month–has been confounding expectations for over two decades. There’s that provocative band name, a tongue-in-cheek nod to founder Nolan Green’s North Texas roots. And the music is a mutated form of jazz, devouring psychedelic rock, metal, hip-hop, and electronic influences along the way. Green founded the group in the early ’90s, and from the beginning, it’s been a collaborative project. Living Colour’s Vernon Reid, Sonic Youth’s Thurston Moore, and dozens from the avant-garde jazz world contributed to the early albums... “Headlong Into The Sun” is the only track created solely by Green, who constructed it in one day."
(@TheGrassyKnoll)

Heather Woods Broderick
"Wyoming"
'Glider'
Western Vinyl, 2015
Notes: "You’ve probably heard Heather Woods Broderick’s voice before. She sings in Sharon Van Etten’s backing band...as well as bands like Horse Feathers and Efterklang... Her new solo album, Glider, was a way for her to hit pause on her fast-moving life and take stock. Fittingly, the songs on Glider (out July 10) are arresting, sumptuous creations. Broderick builds them out of simple guitar phrases and multi-tracked harmonies. “Wyoming” is something out of the Cocteau Twins’ playbook, starting small and lazy before billowing into a big ending."
(@_H_W_B_)

The Mynabirds
"Semantics"
'Lovers Know'
Saddle Creek, 2015
Notes: "On August 7th, The Mynabirds, the indie pop outfit led by singer-songwriter Laura Burhenn, will return with a new album titled Lovers Know. Due out through Saddle Creek, the LP serves as their third to date and follows 2012’s Generals. It was produced by Black English’s Bradley Hanan Carter and reportedly pulls from influences such as Kate Bush, Jesus and Mary Chain, and My Bloody Valentine. According to a press release, it’s Burhenn’s “most personal and confessional works to date.”"
(@TheMynabirds)

Timbre Barons
"Automatic"
'Timbre Barons' EP
self-released, 2015
Notes: "Slender Means hasn’t been a band since 2010, and the Seattle group’s music is surprisingly hard to find online. Thankfully, the formation of the band Timbre Barons – a combination of Slender Means members...is making a lot of Slender Means fans happy... With the release of their second EP in January, Timbre Barons are just getting going, and if their music continues to emanate the spirit of “Automatic,” it won’t be long before they’re a staple of the Seattle music scene."
(#TimbreBarons)