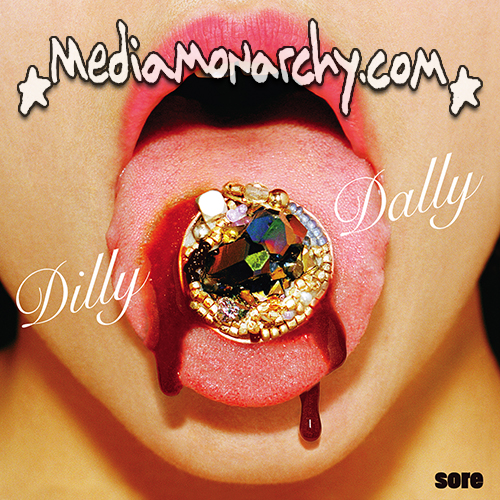 Previous: Episode183 - Tougher Than The Rest

Holly Golightly
"As You Go Down"
'Slowtown Now!'
Damaged Goods, 2015
Notes: "[A lot of people probably] first heard Holly Golightly on the White Stripes track “It’s True That We Love One Another,” a perfect pairing of two strains of garage rock. While the Stripes picked up the banner for the 2000s, Golightly came a decade before with the full-on insanity of the British group Thee Headcoatees. This year, Golightly released two new albums: Coulda Shoulda Woulda and Slowtown Now!. “As You Go Down,” from Slowtown Now!, shows off Golightly’s specialty of mixing the sweet with the sour. The hand claps are chipper, but her voice is all sneer."
(#HollyGolightly)

Dilly Dally
"The Touch/Desire"
'Sore'
Partisan, 2015
Notes: "Over the past year or so, Dilly Dally have been releasing a series of increasingly explosive singles, all in the long lead-up to their debut album, where it sounds like they’ll harness all that rage into something really magical, at least if lead single “Desire” is any indication. It begins with lead vocalist Katie Monks counting off in her distinguished rasp before launching into a knotty tangle of guitars and feedback, all while the word “desire” is chanted over and over in alternating sweet-and-sour takes. “It’s about a huge sexual release, but it’s also about fantasies, youth, and purity,” Monks explained to Fader. The song will show up on the Toronto four-piece’s debut album, Sore..."
(@DillyDallyTO)

Gazebos
"I Don't Wanna Be Here"
'Die Alone' EP
Hardly Art, 2016
Notes: "Gazebos is a Seattle-based act that describes itself as “whoa-pop.” The band’s new single, “I Don’t Wanna Be Here,” strangely embodies this label, an off-kilter and fascinating pop/rock tune with some groove and exceptional vocals. Their debut album for Hardly Art is called Die Alone and will be out February 19."
(@GGazebos)