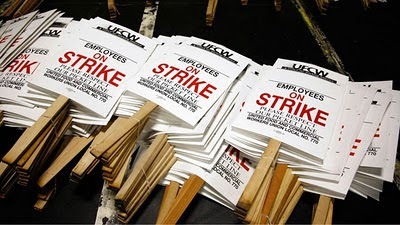 from abcnews: The "Big Three" Southern California grocery chains are bracing for a strike and possible shut down after the union representing grocery workers canceled their contract with the stores. About 62,000 workers in the United Food and Commercial Workers union at Albertsons, Ralphs and Vons could walk off the job as soon as Sunday night. The union's qualms are health-care centric. The union is asking for the companies to shoulder more of the costs. In the current offer from the companies, workers would have to pay $9 a week for solo coverage and $23 per week for a family, union and company officials told the Los Angeles Times. The supermarket chains say that these measures are needed to help offset rising healthcare costs.