from ajc: Failure to address global warming will have us all dead or eating each other by mid-century... One way to combat global warming, Turner said, is to stabilize the population. "We're too many people; that's why we have global warming," he said. "Too many people are using too much stuff." Turner suggested that "on a voluntary basis, everybody in the world's got to pledge to themselves that one or two children is it."

swastika drawn on ashcroft poster at skidmore
from wnyt: Some members of the Skidmore College community plan to protest a lecture Wednesday night by former U.S. Attorney General John Ashcroft. At least one person has already made their feelings known by drawing a swastika on a sign promoting Ashcroft's appearance. Some think the conservative Ashcroft at Skidmore is out of place, but all think drawing a swastika on an Ashcroft poster was out of line.

aaron russo was target of assassination 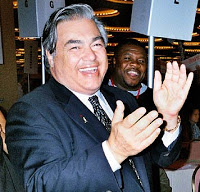 from new york times: A hedge fund manager and art collector from New York testified under immunity Tuesday that Anthony Pellicano, the Hollywood private detective accused of wiretapping and racketeering, had once offered to have a movie producer killed for him. Adam D. Sender, the owner of Exis Capital, a hedge fund that at one point had more than $1 billion in assets, said in Federal District Court here that he had paid Mr. Pellicano about $500,000 to investigate Aaron Russo, a producer and onetime talent manager whose film credits included “Trading Places.” Mr. Russo died of cancer last year.