neo culpa
from vanity fair: As Iraq slips further into chaos, the war’s neoconservative boosters have turned sharply on the Bush administration, charging that their grand designs have been undermined by White House incompetence. In a series of exclusive interviews, Richard Perle, Kenneth Adelman, David Frum, and others play the blame game with shocking frankness. Target No. 1: the president himself. 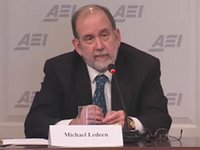 from op-ed news: Michael “Creative Destruction Is My Middle Name” Ledeen, of the conservative American Enterprise Institute, now claims, despite all evidence to the contrary, that “I opposed the military invasion of Iraq.” One of the biggest rats yet to abandon the sinking ship.

evading responsibility for their war
from crooks & liars: Finally forced by reality and public opinion to confess what a disaster their invasion of Iraq has been, most neoconservatives are desperately seeking to heap the blame on George Bush, Don Rumsfeld, military leaders, the American media — anyone but themselves. Others are trying, even more despicably, to blame the Iraqis for the gross failure of the Epic Neoconservative War.

But one of the most vocal warmongers — Michael Ledeen, the “Freedom Scholar” at the neocon American Enterprise Institute (AEI) and Contributing Editor of National Review – is desperately attempting, like a good Stalinist, to re-write history by blatantly lying and claiming that he opposed the invasion of Iraq, even though he was a vocal advocate of it. Yesterday, at National Review‘s Corner, Ledeen wrote:

I do not feel “remorseful,” since I had and have no involvement with our Iraq policy. I opposed the military invasion of Iraq before it took place and I advocated—as I still do—support for political revolution in Iran as the logical and necessary first step in the war against the terror masters.

Ledeen’s claim that he “opposed the military invasion of Iraq before it took place” cannot be described in any way other than as an outright lie. As Meteor Blades pointed out yesterday over at Daily Kos, Ledeen gave an August, 2002 interview to Jamie Glazov at David Horowitz’s Front Page and repeatedly urged the invasion of Iraq, including:

Question #2: Okay, well if we are all so certain about the dire need to invade Iraq, then when do we do so?
Ledeen: Yesterday.