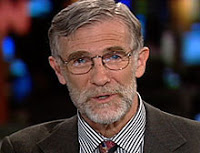 ray mcgovern’s got the goods on cheney

from raw story: A former CIA analyst claims that falsified documents which were meant to show that Iraq's Saddam Hussein regime had been trying to procure yellowcake uranium from Niger can be traced back to Vice President Dick Cheney.

Appearing on MSNBC's Tucker Carlson Show, Ray McGovern who served in the CIA for twenty-seven years, said, "the [forged] memo leads right back to the doorstep of the Vice President of the United States."

According to McGovern, former CIA Director George Tenet told his "coterie of malleable managers" at the CIA to create a National Intelligence Estimate "to the terms of reference of Dick Cheney's speech of August 26, 2002, where Dick Cheney said for the first time Saddam Hussein could have a nuclear weapon in a year, he's got all kinds of chemical, he's got all kinds of biological weapons."

McGovern, who at one time chaired National Intelligence Estimates and prepared the President's Daily Brief, also claimed to have evidence that the memo leads back to Cheney, but he would not say what it was, except that the names of the people involved were "in the public domain."

In an op-ed posted at Buzzflash, McGovern argues,

"If any good can come out of the intelligence/policy debacle regarding Iraq, it would be the clear lesson that intelligence crafted to dovetail with the predilections of policymakers can bring disaster. The role that Tenet, McLaughlin, and their small coterie of malleable managers played as willing accomplices in the corruption of intelligence has made a mockery of the verse chiseled into the marble at the entrance to CIA headquarters: 'You will know the truth, and the truth will set you free.'"

McGovern also calls Tenet a "pathetic figure" who is trying to "justify himself for unjustifiable activity." Tenet, in his new book, claims that the Bush administration distorted his use of the term "slam dunk" in reference to intelligence that ultimately led to the Iraq war (RAW STORY's coverage is here).

The following video is from MSNBC's Tucker Carlson Show.