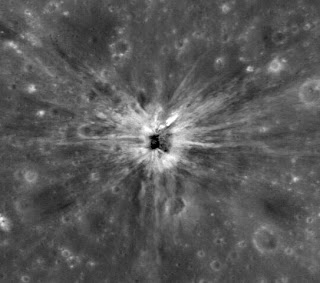 Jeremey Mauney summarizes doubts about our moon satellite in a nicely written post, "Lunar Lights On A Hollow Moon?". Mauney reports, between the years 1540 and 1967 over 540+ lights called Transient Lunar Phenomena (TLP), were recorded on the lunar surface. TLPs seem to resist explanation even to this day. The 18th Century astronomer Sir William Hershel believed lunar cities existed in the moon's craters. Mauney includes the "bell-ringing" events of Apollo 12 and the crashing of the last Saturn stage during Apollo 13 flight (pictured). "In a March 1970 article of Popular Science titled 'How APOLLO 13 Will Probe the Moon's Interior', former SS Nazi and director of NASA, Dr. Wernher von Braun wrote, concerning the crash of Apollo 12's 2.5 ton Lunar Module into the lunar surface; 'The astounding result of that crash: The moon rang like a bell for nearly and hour, indicating some strange and unearthly underground structure.'"

On the next flight, "despite technical malfunctions preventing the Apollo 13 crew from landing on the moon, they still managed to carry out the task of crashing the Saturn V third stage rocket (S-IV B) into it. This time the moon rang out for over 3 hours!"

Mauney carefully notes recent studies of the Apollo-era data have concluded the Moon, "...has an 'Earth-like core' made up of mostly mantle with a solid inner core surrounded by a fluid outer core". The undeterred author cites the Moon's gravitational anomalies that suggest cavities and the recent remarks of Mark Robinson, an Arizona State researcher on new evidence suggesting a network of tunnels under the lunar surface. "They could be entrances to a geologic wonderland... The tunnels offer a perfect radiation shield and a very benign thermal environment..."

Mauney relates his visual impression of the Moon, "I can't help but notice how similar our moon looks in comparison to a metal-plated ball covered in dust that's been sprinkled with water. Not much variation of crater depth - as if something below the dusty surface is preventing much impact damage to the inner-exterior & interior." It does seem counter to say globes with large mountain ranges?

The author believes, "it's becoming increasingly obvious that someone doesn't want us to know the whole truth." Mauney leaves the subject with the observations we haven't returned to the Moon in forty years, and at the very least, the Earth is visited by extraterrestrials. The author includes links to brief interview videos of Gordon Cooper, Neil Armstrong and Buzz Aldrin. The Cooper interview impresses as extremely authentic and can be viewed on You Tube here. What is really up there and will we ever know?