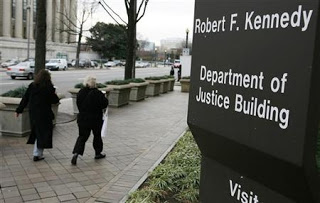 from reuters: Nearly all of the terrorism-related statistics reported by the U.S. Justice Department and the FBI from the September 11 attacks until early 2005 had some inaccuracies, the department's inspector general said on Tuesday.

The findings drew immediate criticism from U.S. senators, who said it raised serious doubts over how effectively the administration was fighting the terrorism threat.

"If the Department of Justice can't even get their own books in order, how are we supposed to have any confidence they are doing the job they should be?," said Sen. Charles Schumer, a New York Democrat.

"Whether this is just an accounting error or an attempt to pad terror prosecution statistics for some other reason, the Department of Justice of all places should be classifying cases for what they are, not what they want us to think them to be," Schumer said.

"We found many cases involving offenses such as immigration violations, marriage fraud, or drug trafficking where department officials provided no evidence to link the subject of the case to terrorist activity," the report said.

Inspector General Glenn Fine said the Justice Department should clarify the definitions it uses in its anti-terrorism categories, maintain adequate support for the numbers and improve internal controls to improve accuracy.

The report found the statistics were inaccurately reported for various reasons.

Sen. Chuck Grassley, an Iowa Republican and a judiciary committee member, said of the report: "The question I have now is whether the inaccuracies are an accident or if there was some other motive behind it."

The collection and reporting of terrorism-related statistics have been decentralized and haphazard, according to the report and most of the statistics were significantly overstated or understated.

Department officials failed to establish internal controls to make sure the statistics were accurately gathered, classified, and reported.

In response to the report, spokesman Dean Boyd said the Justice Department, with few exceptions, had already implemented the changes recommended by the inspector general.