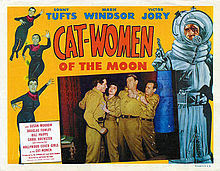 What do you do when you're running out of air on the Moon?  Your million year old civilization drawing to a close.  A few surviving Cat-Women on the dark side of the Moon, telephatically influence Marie Windsor to bring a spaceship to them.   1953 Sci-Fi B-movie, "Cat-Women of the Moon," brings viewer strictly B-movie effects such as a cigarette catching fire or the principal actors' hair dryer domes for space helmets.  There's still an endearing element to B-film fare as Wikipedia describes plot:

"An expedition to the moon encounters a race of 'Cat-Women', the last eight survivors of a 2-million-year-old civilization, deep within a cave where they have managed to maintain the remnants of a breathable atmosphere that once covered the moon. The remaining air will soon be gone and they must escape if they are to survive. They plan to steal the expedition's spaceship and return to Earth."

"Through the use of their telepathic ability the Cat-Women have been subliminally controlling Helen Salinger (Marie Windsor) so she can win the navigator slot on the expedition and lead the crew to their location. Once Helen and the male members of the crew arrive on the moon the Cat-Women take complete control of her mind. They are unable to control the men's minds, but they work around this obstacle with Helen's help and the use of their superior abilities and feminine wiles. 'Show us their weak points,' one says to Helen. 'We'll take care of the rest.'"

The back story of lead actor Sonny Tufts, is perhaps, more interesting than the movie. A Yale grad and member of Skull and Bones, born Bowen Charlton Tufts III was from a prominent banking family, the name also given Tufts University. Tufts became something of an urban legend due to his alcoholism and a notoriety for drunken incidents.  The name of Sonny Tufts became well-worn Hollywood punchline for his drunken reputation throughout Hollywood!