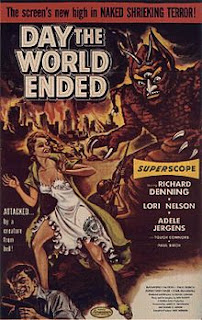 Day the World Ended (1955) was the fourth film directed by Roger Corman. Rick (Richard Denning)
is a heroic scientist who, among others, must face off against a mutant
monster (Paul Blaisdell) after an atomic war destroys human
civilization. Chet Huntley of NBC, later of The Huntley-Brinkley Report, narrates according to Wikipedia.  Paul Birch steals spotlight in supporting role as Jim Maddison,who prepared for nuclear catastophe by stocking up and chosing to live in a box canyon shielded from radiation.  The story begins after smoke clears with Mike Connors, who is best known as star of popular sixties TV-series "Mannix," billed as "Touch Connors," a reference to his UCLA basketball scholarship days, shows up on Maddison home doorstep.  Maddison displays honest fifties morality by telling daughter Louise, played by Lori Nelson, he can't allow them in because he has only enough provisions for them.  Louise allows Connor's character, Tony Lamont in along with his girl, Ruby, a showgirl played by Adel Jergens, who rose in show business by winning title of  "Miss World's Fairest" at the 1939 New York World's Fair and later named New York's Number One Showgirl. Lamont proves to be a psychopath, who gets dispatched late in movie by Maddison, when Lamont reveals his intent to kill Rick.


Radiation theory in movie, seems quaint, with mutations of a thousand generations the result of one exposure. The victims exhibit different characteristics with each level of exposure. Maddison shares his navy experience with atomic tests with Rick.  The animals suffered mutated skin, extra limbs, horns and a monkey with another eye. Radiation theory has mutants growing stronger with level of exposure, who can only be sustained by radioactive food sources due to transformed constitutions. The mutant monster calls to Louise several times in movie with telepathy.  Louis is finally lured out of the house under mind control and abducted.  Louise escapes to find refuge in fresh water lake, where monster pulls up short and refuses to pursue.  Torrent of fresh rainwater kills mutant who appears to react to water with some fizz as it expires.  Louise expresses sadness at mutant's fate, an odd sentiment but thoroughly B-movie style!  Day the World Ended holds attention throughout and admission is free. Raymond Hatton, who appeared in nearly five hundred movies, in one of his last roles as old-timer Pete.

You Tube makes movie available in eight parts below.