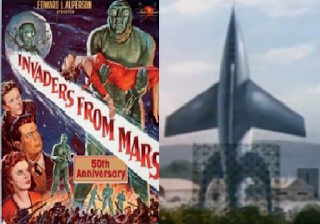 A film gem, “Invaders From Mars,” is a 1953 sci-fi flick, where young boy David MacLean, played by Jimmy Hunt, is the star and hero! David, already a keen astronomer, is awakened one night by a flying saucer, viewed outside his bedroom window as it descends just over a hill in nearby sandpits. The young boy alerts his scientist father, George (Leif Erickson) and mother, Mary (Hillary Brooke). David convinces dad to investigate only to have him not return. Mary reports her husband missing, police arrive to investigate only to fall prey to Martain invaders, who capture earthlings by collapsing the sand right out from under their feet by a device that apparently also emits strange musical tones. George and two policemen finally return – greatly changed – each exhibiting a cold, suspicious demeanor. More townspeople fall prey to the implants, later discovered in their necks after victims are terminated. David seeks help and slowly convinces Dr Pat Blake (Helena Carter) something is terribly wrong! Dr Blake enlists aid of Dr Stuart Kelson (Arthur Franz), an astronomer, who witnesses by telescope another victim falling through the sandpits. Kelston speculates Martians are concerned about earthling rocket tech (picture, right). ” Dr. Kelston contacts the army and convinces them to immediately investigate: an important government rocket research plant is located nearby. In short order the Pentagon marshals its forces and sends troops and tanks under the command of Colonel Fielding (Morris Ankrum). An alien sabotage plot at the plant is soon uncovered, leading back to the sandpit, and the army surrounds the saucer landing site, “ according to Wikipedia.

While the army searches, Dr Blake and David are sucked underground into Martian tunnels taken to area of Martian ship, where mind-control procedures are performed by mute underlings of a leader, whose identification is given as “mankind developed to its ultimate intelligence.” Wikipedia entry provides leader’s description as “… the Martian Mastermind: it has a giant green head with a humanoid face atop a small, green partial torso with several green arm-tentacles, and is encased in a transparent sphere.” Dr Blake and David are rescued without suffering implantation by Colonel Fielding and troops, who set a detonator onboard ship for six minutes.

The movie takes a surreal swerve with sequence where David runs from sandpits and saucer as army continues to bombard site as Martian saucer emerges from underground. The viewer never sees Martin ship departing or an explosion and David is never seen actually reaching home. The next sequence has David waking up in his bed again with same events, a saucer descending over hill and strange musical tones to end movie. Is it a dream or premonition?

Movie is interesting for coverage of topics such as mind control, nuclear powered ships and nostalgic clips of steam train engines still in operation and rotary dial telephones. You better enjoy as even older sci-fi movies are rapidly disappearing from the net. Ticket prices are free for a short time only!

One response to “Retro Sci-Fi Weekend: ‘Invaders From Mars’”