Retro Sci-Fi Weekend: Not of This Earth 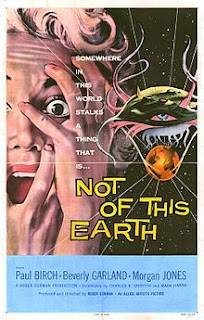 The setting is fifties California, where homes come equipped with basement incinerators?  Women wear bathing caps with their one piece swimsuits.  Kids jump in and out of MG roadsters, spouting beat generation lingo.  Roger Corman produced and directed, "Not of This Earth," a sci-fi film with plenty of creep factor even for California.  Paul Birch stars in lead role, playing an alien from a world called Davanna, who suffers terminal blood disease.  Birch plays role admirably as out-of-place alien, who takes name Paul Johnson while on mission to save his kind.  Johnson is conspicuous for his ever-present sunglasses, sensitivity to loud noises, lack of social savvy and demand for immediate blood transfusions.  Nadine, a nurse played by Beverly Garland, quickly gets hired to tend to the alien's blood needs to stem "evaporation" of blood.  Suspicions are aroused when visitors never seem to leave the Johnson home, while incinerator blows smoke!   Johnson blocks mind of subhuman Dr Rochelle, who researches disease to aid the alien.   The doctor concludes later, Johnson is not human when another female alien with shades and same blood disease dies and  bizarre alien eyes are uncovered.   Johnson dispatches Dr Rochelle by deploying strange creature to terminate the doctor.  As the situation is lost Johnson commands Nadine with his alien mental power to transport herself to Davanna as he deals with cycle cops sent to stop him.  The alien is only stopped by blare of police siren, crashing his car.  Nadine snaps out of spell inside alien transporter in time to escape!  The final scene shows another similarly attired individual coming up from behind upon the alien gravesite, whose epitaph reads, "Here Lies A Man Who Was Not Of This Earth."   It's a solid 67 minutes of entertainment!  You may begin watching below the fold!