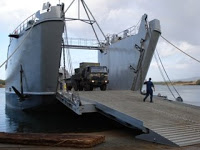 'lightning rescue 2008': the military takes steps to prepare for a pandemic flu (or to cause one?)

The exercise is a part of Lightning Rescue 2008.

The emergency exercise is being conducted by the 307th Single Battalion soldiers and over 200 military person ell and civilians. Together they will take part in setting up, mobilizing and operating a mock quarantine area to stop a deadly virus from spreading. The 307th Single Battalion is capable of controlling and commanding communications for military units anywhere in the world.

midsummer alert: noble resolve & diablo bravo
from ghost troop: Neo-cons and their allies are pounding the drums of war against Iran. Just after his White House meeting on June 4, Israeli Prime Minister Ehud Olmert announced that war with Iran was a done deal:

"George Bush understands the severity of the Iranian threat and the need to vanquish it, and intends to act on that matter before the end of his term in the White House." http://antiwar.com/mcgovern/?articleid=13020

In his July 14 article “Amber Alert! Get Ready for War” http://antiwar.com/justin/?articleid=13130 Justin Raimondo states “The Israelis have already been using U.S. bases in Iraq to train for the coming attack… [Bush] is more determined than ever to leave his lasting mark on the Middle East and the world.”

In his July 15 article “A Phony Crisis – And A Real One” http://antiwar.com/pat/?articleid=13134 Pat Buchanan writes: “Israel and its Fifth Column… seek to stampede us into war with Iran.”

In his article, “9/11 and the Neo-Con Agenda” http://digg.com/politics/9_11_and_the_Neo_Con_Agenda_2 Dr. James H. Fetzer explained why the Bush Administration needs another (self-inflicted) “false flag” attack to expand the failing war in the Middle East.

As experienced military professionals, it is our mission of conscience to publish alerts to the American people whenever the danger of a false flag attack is high. We face that danger now with several suspicious military exercises just ahead of us.

On July 22 Virginia will run a Weapons of Mass Destruction (WMD) scenario at the Richmond International Airport. For two weeks we have tried to gather particulars on the terror drill from the Virginia National Guard. The command has been evasive, refusing us access to personnel involved in the WMD-related activities. 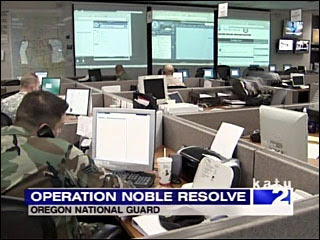 The National Guard Bureau informed us that during Noble Resolve ‘08, Virginia will run scenarios involving a rail incident and a terrorist attack. Both Indiana and Oregon will simulate earthquakes. In “Marine Corps Martial Law?–An Indy Alert Update” http://www.lonestaricon.com/absolutenm/anmviewer.asp?a=2938&z=256 we described recent terror drills that brought 2,300 Marines to the Indianapolis area last month. Two weeks ago, Capt. Stephen Bomar, public affairs officer for the Oregon National Guard, told us that a “surprise inject” for Noble Resolve 2008 could include a WMD anywhere in the state.

Texas will also be prepared for surprise injects—including nuclear devices. Exercise officials refused to provide details, saying that they did not want to spoil the surprise for exercise participants. In “Texas Terror, Code Blue!” http://www.lonestaricon.com/absolutenm/anmviewer.asp?a=3036&z=262 Capt. May detailed official evasions about recent terror drills in the Houston area, which have led notable intelligence writers to settle on Houston as the most likely target for a false flag attack. He included the suspicious gunning down of CIA operative Roland Carnaby, who may have been involved in a terror plot, by Houston police. 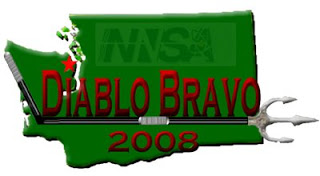 Diablo Bravo, like Noble Resolve, is a national-level exercise. It involves Department of Energy-controlled nukes in the state of Washington. According to local officials, on July 28, “the public may see a puff of smoke with a bang at the exercise start and observe some increase in vehicular traffic” near the U.S. Strategic Weapons Facility in Bremerton. Diablo Bravo will have 500 participants from a wide range of local, state, and federal agencies across America.

In addition to Noble Resolve and Diablo Bravo, there are two other noteworthy concurrent exercises. “Immediate Response 2008,” running for three weeks beginning in mid-July, involves a thousand American troops training in the nation of Georgia. The Bush administration is pressuring east Russia, probably in preparation for an attack on Iran in Russia’s south. “JTFEX 08-4, Operation Brimstone,” running from July 21-31, involves 15,000 military personnel in amphibious exercises along the U.S. southeast coast, probably simulating the Iranian coastline.

We believe that since 9/11 the American people have already thwarted false flag attempts with well-timed Internet alerts. The Internet can effectively interdict treasonous intentions. Shining just a little light can cause the cockroaches of conspiracy to scurry. Accordingly, we urge you to pass this alert along to first responders, elected officials, media – and all other American citizens. The future of our nation may depend upon your action.

as an update/supplement ... this article provides more details about the exercises and related issues.