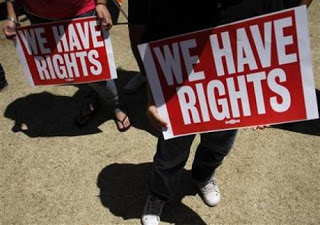 As reported last month: with the passage of Obamacare, the next item on the NWO agenda would be immigration 'reform' ... and remember: Congress will use the immigration issue to push for a national biometric ID card for all workers* 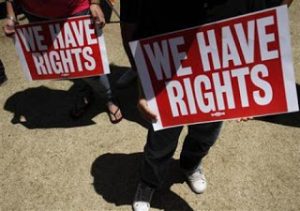 Protest organizers said on Wednesday outrage over the Arizona law - which seeks to drive illegal immigrants out of the state bordering Mexico - has galvanized Latinos and would translate into a higher turnout for May Day rallies in more than 70 U.S. cities.

"The marches and demonstrations are going to be far more massive than they otherwise would have been," said Juan Jose Gutierrez, a Los Angeles rally organizer who runs an immigration assistance company.

The backlash began on Friday after Arizona Governor Jan Brewer signed into law a measure that requires state and local police to determine a person's immigration status if there is "reasonable suspicion" they are undocumented. Critics say it is unconstitutional and opens the door to racial profiling.

Republican backers of the law say it is needed to curb crime in the desert state, which is a key corridor for drug and migrant smugglers from Mexico.

The crowds on the streets, from Los Angeles to New York, could be the biggest since 2006, when hundreds of thousands of marchers urged former President George W. Bush to overhaul of federal immigration laws. He tried, but failed in Congress.

"With what's going on in Arizona we see renewed energy for folks to fight for immigration reform," said Marissa Graciosa, of the Fair Immigration Reform Movement, an organizer of rallies and vigils on Friday and Saturday.

In Washington, a diverse group of more than two dozen lawmakers - Hispanics, blacks, Asians, whites - held a news conference outside the U.S. Capitol on Wednesday to denounce the Arizona law as a violation of civil rights.

"What Arizona has done is that it has galvanized, united, fortified, focused our immigration movement," Democratic Representative Luis Gutierrez declared at the news conference.