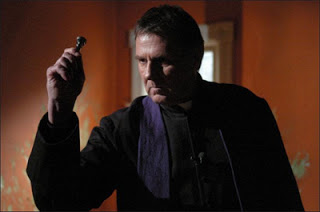 To perform the rite, the exorcist dresses in his surplice and purple stole. The ritual of exorcism is mostly a series of prayers, statements and appeals. These prayers are loosely broken down into the 'imploring formula,' in which the priest asks God to free the subject from the devil ('God, whose nature is ever merciful and forgiving, accept our prayer that this servant of yours, bound by the fetters of sin, may be pardoned by your loving kindness'), and the 'imperative formula,' in which the priest demands in the name of God that the devil leave the subject's body ('Depart, then, impious one, depart, accursed one, depart with all your deceits, for God has willed that man should be His temple')."

"In addition to these recitations, the priest takes certain actions at particular times during the rite: He sprinkles holy water on everyone in the room, lays his hands on the subject, makes the sign of the cross both on himself and on the subject and touches the subject with a Catholic relic (usually an object associated with a saint)."

HowStuffWorks article also cites influence of Malachi Martin and his book "Hostage to the Devill." Martin considered following stages typical of an exorcism: "1) Pretense - The demon is hiding its true identity, 2) Breakpoint - The demon reveals itself, 3) Clash - The exorcist and the demon fight for the soul of the possessed and 4) Expulsion - If the exorcist wins the battle, the demon leaves the body of the possessed."