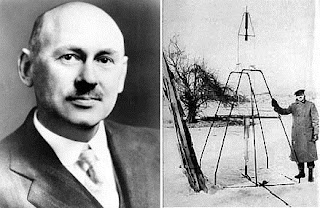 Dr Robert H. Goddard, professor and inventor, built first liquid fuel rocket launched March 16, 1926 from his aunt's farm in Auburn, MA. Goddard authored research monograph in 1919, "A Method Of Reaching Extreme Atlitudes," still "considered one of the classic texts of 20th-century rocket science," according to Wikipedia. Goddard was generally criticized in the United States for his rockets, but enjoyed more respect abroad. In 1920, the New York Times rebuffed Goddard for failing to recognize rocket propulsion could not work in the vacuum of space. The three years following 1926 launch, saw little progress and noise complaints, forced Goddard to move his testing grounds. In 1929, Goddard gained the attention of Charles Lindburgh, the famous aviator, who helped secure funding for his continued work.

An excellent biography, "An historical essay on the life and work of Robert Hutchings Goddard," provides details of his life. Goddard experienced a vision after climbing a cherry tree as a youth that led to his life's work. What seems curious about Goddard is how he ended up for an extended period three miles outside of Roswell, NM? It's also curious that Goddard would die from throat cancer on August 10, 1945 and Wernher Von Braun would arrive shortly after with other Operation Paperclip scientists in September, 1945. Many experts attribute the V-2 design to the work of Dr Goddard and similarities are noteworthy. Would Goddard have presented a problem if he raised objections about design of V-2 with the many patents held by him? You can only wonder? You are, of course, directed to move along - nothing to see here!

Michael Neufeld, curator of Space History at the National Air and Space Museum, provides a nice survey of Goddard below - good stuff!