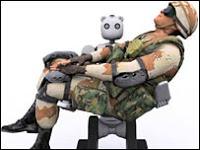 from cryptogon/bbc: The US military is developing a robot with a teddy bear-style head to help carry injured soldiers away from the battlefield.

The Battlefield Extraction Assist Robot (BEAR) can scoop up even the heaviest of casualties and transport them over long distances over rough terrain.

New Scientist magazine reports that the "friendly appearance" of the robot is designed to put the wounded at ease.

It is expected to be ready for testing within five years... 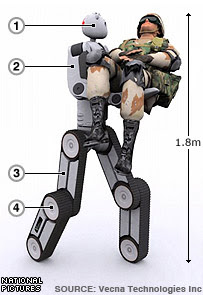 Daniel Theobald, the president of Vecna Technologies, which is developing the robot for the US Army, said: "We saw a need for a robot that can essentially go where a human can. The robot will be an integral part of a military team."

Gary Gilbert, from the US Army's Telemedicine and Advanced Technology Research Centre in Frederick, Maryland, said that the teddy bear appearance was deliberate.

"A really important thing when you're dealing with casualties is trying to maintain that human touch."

Vecna is working on other potential applications for the robot technology - including helping move heavy patients in hospital.