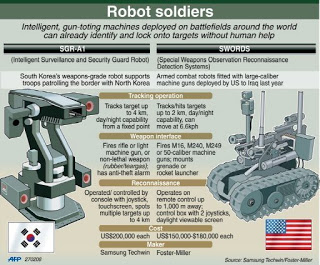 from afp: Increasingly autonomous, gun-totting robots developed for warfare could easily fall into the hands of terrorists and may one day unleash a robot arms race, a top expert on artificial intelligence told AFP. "They pose a threat to humanity," said University of Sheffield professor Noel Sharkey ahead of a keynote address Wednesday before Britain's Royal United Services Institute.

from washington technology: Science Applications International Corp. will assist the Army in developing technology that will allow troops to see inside buildings during urban military operations under a $5.2 million contract, the Defense Department announced Feb. 19. Under the contract, SAIC will help the Army develop and test technology for the concept known as VisiBuilding.

from click2houston: A billboard went up along the Southwest Freeway depicting the Bayou City as a terrorist target. It is a bright orange fire cloud over Houston. It's a campaign billboard for Brian Klock, a Republican candidate for U.S. Rep. District 22... "I used to read the threat. I knew what was going on locally right here in Houston. I believe it is a real threat," he said. The billboard depicts Houston's economic heart under attack - the ship channel, refineries and the skyline all seen through the scope of a gun. "It's a depiction of a worse case scenario I want people to know it's out there," Klock said. 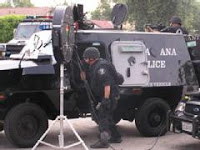 from nbc11: San Jose police have a new crime fighting tool. You might want to hear about it, but you won't want to hear it being used. They'll be using a dish-shaped, sonic weapon called a Long Range Acoustic Device - or L-RAD. Police say it will be used mostly as a high-grade sound system to amplify a police officer's order at great distances. But it can also be used as another of the department's "less-lethal" weapons. The ear-splitting device is growing in popularity around the globe and has been used by soldiers to flush suspected terrorists out of caves in Afghanistan. 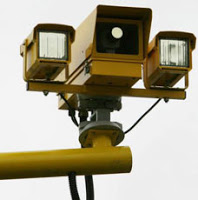 from daily mail: Motorists will be targeted by a new generation of road cameras which work out how many people are in a car by measuring the amount of bodily fluid it contains... The cameras work by sending an infrared beam through the windscreen of vehicles which detects the unique make-up of blood and water content in human skin.