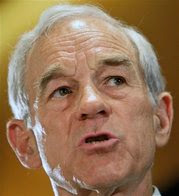 from ap: Dueling delegations pitting Ron Paul's Nevada supporters against those of John McCain vow to take their fight to the Republican National Convention.

That's just one sign that the outsider, Internet-fueled movement led by the feisty Republican congressman from Texas remains afloat in the wake of McCain's victory in the GOP primaries.

In the libertarian-leaning West, where Paul's message of distrust of the federal government and ardent individualism played particularly well, there is talk of Republicans straying from McCain. Libertarian candidate Bob Barr has emerged as a favorite alternative for Paul activists, followed by Constitutional Party candidate Chuck Baldwin.

Even if the numbers of such dissenters are small, in tight contests in key Western states they could spoil McCain's chances, experts say.

"In Nevada, there's absolutely enough to have an effect on the election," said Chuck Muth, a leading conservative activist in a state in which early polls show McCain and Democratic candidate Barack Obama in a statistical tie.