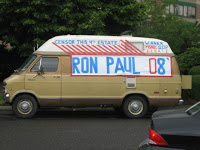 from cbs: Ron Paul's fervent supporters have something to crow about: With nearly all precincts reporting, the Texas representative is sitting in second place in the Nevada caucuses... “Ron Paul has once again topped multiple media-anointed ‘frontrunners’ with his poll-defying second place showing in Nevada,” Paul campaign chairman Kent Snyder said in a statement. “We’re in this race to win, and we’re going to battle for every delegate in this wide-open race for the Republican nomination.”

ron paul has sticking power, but how much?
from c.j. anderson: Paul won second in Nevada! excellent, and he will have a good showing in the future (even if he just wins Alaska he has succeeded in getting his message out). He has tons of cash, and another donation day on the way (freeatlast2008.com). What does all this mean? It means he has enough support and enough money to last until the convention in September, but is that good enough? No, it's not. He needs longer lasting power. The Libertarian boost seen in this election, thanks to Paul, needs to go on past November and on into the next presidency... I realize my last article was put up on the Alex Jones Info Wars website and I'll take this opportunity to state I think 9/11 truthers are insane and couldn't be farther from the truth. In my personal opinion I would have no objection to vigilante justice in response to their sign waving events.

video: msnbc on paul's nevada 2nd place
from vegasbd: "...Ron Paul is someone to watch..."

new york times censors ron paul
from charlotte conservative voice: Ron Paul finished second today beating McCain, Thompson, Giuliani and Huckabee in Nevada. Yet the rag newspaper New York Times found a way to continue to ignore Ron Paul. The “official results page” on the New York Times website does not even list Ron Paul as a candidate... But the New York times thinks this isn’t worth their ink to print. Ron Paul out performed Senator Edwards today 3 to 1 in percentage points but still they dont even print his name.

nevada gop dismisses paul complaint
from boston globe: Ron Paul, other than Mitt Romney the only Republican actively campaigning for Saturday's Republican caucuses in Nevada, called this afternoon for the state party to consider postponing the contest due to "multiple inconsistencies." But the state Republican Party immediately dismissed the allegations and said the caucus would go on as planned.

video: 'the name i keep hearing in vegas is ron paul'
from raw replay: Nightline takes a closer look at Las Vegas a different kind of electorate. The following video is from ABC’s Nightline, broadcast on January 18, 2008