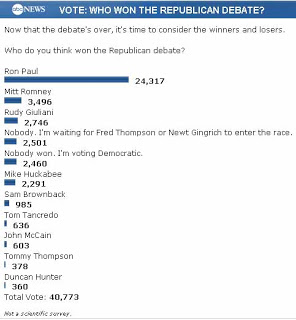 another republican debate & another ron paul victory... hopefully, you had the chance to head over to drudge & abc and cast your vote for the only candidate that can beat hillary clinton... ron paul!

(and just think, only 3 months ago ron paul placed 3rd in a drudge poll...) 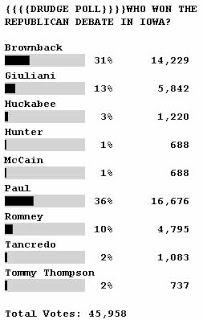 from reuters: Rep. Ron Paul of Texas, in criticizing the Bush administration's emphasis on expanding democracy, went back more than 80 years to quote President Woodrow Wilson and his "making the world safe for democracy."

from boston herald: Republican presidential contenders sparred over abortion on Sunday while generally agreeing the United States must remain is n Iraq to help win the war on terror.

"Just come home," dissented Texas Rep. Ron Paul, the lone advocate of a quick troop withdrawal on a presidential campaign debate stage. He said there had never been a good reason to go to war in the first place.

"Has he forgotten about 9/11?" interjected former Massachusetts Gov. Mitt Romney.

from des moines register: U.S. Rep. Ron Paul of Texas, who has attracted a loyal Internet following, has been the Republican candidate field's most outspoken war critic.

"We went there illegally. We did not declare war. It's lasting way too long," Paul told the Drake University and ABC-TV audiences. "We ought to just come home."

from abc news: Texas Rep. Ron Paul had harsher words for the administration, saying that Cheney is more powerful than Bush and that he would support an amendment to define the Vice President's duties.

All but two of Republican presidential candidates oppose a timetable for withdrawal from Iraq.

Responding to a video question asking the candidates to clarify their strategies for ending the war in Iraq, congressman Ron Paul came out swinging in support of immediate withdrawal.

"We went in illegally and we ought to just come home," Paul charged from the podium to scattered audience cheers.

from monsters & critics: GOP candidate Ron Paul latest news shows that in a Matt Drudge (Drudge Report) initiated poll of which GOP presidential hopeful won the debate in Iowa, the leader with 45% of the vote was, Ron Paul. (that sentence is a grammatical nightmare...)

Dr. Paul, an East Texas Doctor and congressman, has quietly stepped into the Howard Dean and Ross Perot slot of the upcoming election, and signs of his support seem to be growing based on the latest numbers cited on CNN today.