from ap/my way: On defense for much of the evening, Giuliani switched gears nearly an hour into the debate, challenging Rep. Ron Paul's suggestion that the U.S. bombing of Iraq had contributed to the terrorist attacks of 2001. As mayor of New York at the time of the attacks, Giuliani said sternly, "I don't think I've ever heard that before, and I have heard some pretty absurd explanations." His rebuke to Paul drew some of the loudest applause of the night from the partisan audience. 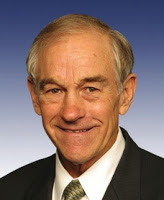 from raw story: Long-shot Republican candidate Ron Paul said the current slate of candidates need the "courage" of former President Ronald Reagan to be able to withdraw US troops from Iraq. The Texas Congressman, who has become an internet favorite but does not register much support in polls, said the Middle East is too unstable a region in which to maintain an indefinite US military presence.

from propaganda matrix: In a sickening display of cronyism and as a consequence of the sheer terror elicited amongst the establishment after his previous success, Fox News rigged last night's entire presidential debate in a crass effort to smear Ron Paul - yet the Texas Congressman still beat Rudy Giuliani in Fox's own poll.

If you thought the MSNBC debate was somewhat unfair towards Ron Paul, then this was an absolute debacle.

The audience for the debate was clearly pre-screened and pre-selected to include only mainly geriatric 75 year old plus Fox News viewers who are scared of their own shadow. How else can the bizarre applause for warmongering and torture, which polls show are both clearly opposed by the majority of American people, be explained?

Guantanamo Bay is uniformly abhorred, even to the point where George W. Bush himself said he wanted to close it down, and yet Romney is applauded for saying he would like to double it!

Are these audience members robots or did Fox News dub the audio to include the applause?

Giuliani clearly endorses torture and the mindless drones in attendance rapaciously lap it up! Fox News manufactured a fictitious scenario to rig the debate - the notion that terrorists are about to detonate a nuclear bomb and that only torture can lead to its discovery.

Host Brit Hume failed to mention the fact that obtaining confessions from torture is notoriously unreliable because the victim simply tells the interrogator what he wants to hear, and not necessarily the truth. In fact, using torture in place of more traditional investigative techniques would only create false leads, waste more time and put the country in more danger.

Under the Constitution of the United States, which any of these potential Presidents will have to swear an oath to uphold, evidence obtained from torture is not admissible in court. In effect, Giuliani, Romney and Tancredo (who has now completely discredited himself) have promised to violate the Constitution before they even get into office.

After the show, Hannity and Colmes double-teamed Paul in an attempt to discredit him in the eyes of both liberals and conservatives, with Colmes going after him on abortion and Hannity chomping at the bit to smear the Texas Congressman as weak on terrorism.

This followed a showdown between Giuliani and Paul in which the Texas Congressman pointed out the fact that U.S. foreign policy has bred hatred of America throughout the world, a self-evident truth that is even embraced by the CIA itself, and was scorned by Giuliani in response.

Despite the fact that Paul was given the more difficult questions and less time to answer them and was then savagely attacked after he debate, he still came out on top when the early polling began, eventually finishing a close second to Romney and easily ahead of Giuliani.

Fox News were obviously desperate to prevent Ron Paul winning the poll because they restricted it to text message only, no Internet voting, and closed it down declaring Romney the winner after just three hours.

Fox News anchor Carl Cameron immediately tried to spin Paul's success in the poll when it became apparent he was winning with 30% of the vote shortly after 11PM. Cameron roared that Paul had been "slapped down" by Giuliani in the debate and that his success was merely because his office was unfairly flood voting - ignoring the fact that McCain had openly told his supporters to spam the polls on his own website. 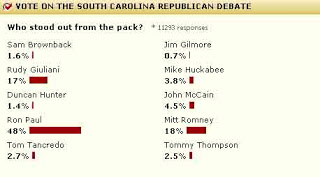 An MSNBC poll again shows Ron Paul trouncing the other candidates, beating his nearest contenders hands down in every category. 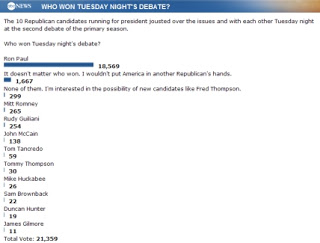 ABC News' poll has Ron Paul at 18,500+ votes, with his nearest rivals Romney and Giuliani barely making it into the 200's. This is an emphatic win for the Texas Congressman.

Despite the fact that this whole event was a giant orchestrated smear job on behalf of Fox News to eliminate Ron Paul from the race, his message of liberty and real conservatism still resonates with the American people and no amount of vitriol on behalf of Neo-Con Rupert Murdoch and his underlings is going to change that fact.

update: ron paul discussed on c-span
from blacklisted news/you tube: Tons of phone calls endorsing Ron Paul on C-Span's Washington Journal this morning following last night's debate. Washington Journal is typically a program viewed by an older demographic. This shows that people across the political spectrum are not fooled by the cartoon like antics Fox News tried to pull on Ron Paul in yesterday's debate.