from latimes: The "Ron Paul Revolution" isn't over until Ron Paul says it's over. And he's not done yet. Amid reports that Paul would formally end his presidential campaign, the iconoclastic Texas Republican congressman instead told supporters Thursday night that he intended to lead a "Campaign for Liberty" movement to give libertarians a bigger say within the GOP. 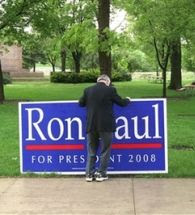 from ap: Republican presidential candidate Ron Paul will end his campaign Thursday night and announce a new effort to help elect libertarian-leaning Republican to public offices around the country.

Campaign spokesman Jessee Benton said the announcement, expected during a speech outside the Texas Republican convention, was "not a disappointment at all. I think this is really exciting."

Paul's announcement will be a formality.

The 72-year-old Texas congressman won few delegates during the Republican primaries. But he raised millions of dollars online and developed a large, grass-roots following among those who backed his call for end the war in Iraq and smaller government at home.

Supporters have pushed for a speaking role for him at the Republican National Convention in September in St. Paul, Minn. Paul has said he won't endorse Sen. John McCain, the likely GOP presidential nominee. Benton said that was unlikely to change.

nancy pelosi pulled iran bill on orders of israel
from we saw that: In a speech given on 06 june 2008, in reston, virginia, at the hyatt regency, reston, to the future of freedom foundation, 'restoring the republic 2008: foreign policy and civil liberties' conference, congressman ron paul, tells how speaker of the house, nancy pelosi, acting on orders of israel and aipac, 'deliberately' pulled a supplemental bill requiring congressional approval for attacking iran.

paul rejects mccain ‘values,’ praises barr
from raw story: Rep. Ron Paul recently made waves when he announced his intention to stage a competing one-day mini-convention across town from the Republican National Convention next September... Paul spoke to CNN’s John Roberts on Wednesday about his plans for the gathering, insisting that he does not see it as a “mini-convention” but merely as a “rally” to celebrate his campaign.