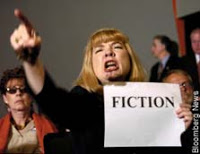 from new york post: A group of 9/11 victims’ families who have criticized Rudy Giuliani‘s record vowed yesterday to reveal the “truth” of his performance during the terror attacks.

The angry words came after The Post reported that supporters of Giuliani have started discussions with 9/11 family members about backing him in a 2008 White House race.

His moves may be an attempt to head off criticism from relatives like Sally Regenhard, the mother of a late firefighter who vowed months ago to make “Swiftboat”-type criticisms of the ex-mayor.

She co-founded a group called the Skyscraper Safety Campaign and heckled Giuliani when he testified at 9/11 commission hearings in 2004. She has long blamed Giuliani for communications failures, including faulty radios, at the World Trade Center on Sept. 11, 2001.

“My role, and the role of other family members, will be to bring this truth to light,” she said.

Regenhard said she didn’t want a fight with other victims’ relatives, but said, “If these family members knew the truth about the failures of this administration… they would reconsider support for someone like him.”

Giuliani gained renown for his calming voice and handling of the recovery effort immediately after the attacks. That fame launched him as a national figure and a GOP star.

On Tuesday, Lee Ielpi – a former firefighter who lost his son on 9/11 – said he had approached a Giuliani aide about supporting the former mayor in 2008. Asked how he would respond if other families criticized Giuliani, Ielpi said, “I would address their questions to the best of my ability without having a conflict . . . with other family members.”

Giuliani spokeswoman Sunny Mindel said, “We have received a lot of calls from people from all walks of life and from all parts of the country who support Rudy.”

Monica Gabrielle, who works with Regenhard and lost her husband on 9/11, said Giuliani is “riding on a myth that he created, and if he were truly a leader, he would have discussed the [communications] failures.”

But she said she had no issue with his supporters discussing the presidential race with any 9/11 family members.

Lorie Van Auken was one of the “Jersey Girls” who helped push for the creation of the 9/11 commission, which examined the intelligence failures leading up to the attacks. She said she has no plans to try to counter Giuliani’s positive publicity.

“I am not planning anything yet, but I wouldn’t be averse to making my opinion clear,” said Van Auken, who has strongly criticized Giuliani.