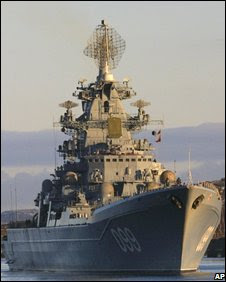 russian warships set sail for manoeuvres near US waters

from afp: A fleet of Russian warships led by a massive missile cruiser set sail from their Arctic base on Monday for naval exercises off Venezuela near US waters that have not been seen since the Cold War. "They left at 10:00 am (0600 GMT). It's the nuclear-powered guided missile cruiser Peter the Great, the anti-submarine warship Admiral Chebanenko and other accompanying ships," Russian navy spokesman Igor Dygalo told AFP.

Dygalo said he could not reveal how many ships were involved in the deployment or when they would arrive. The exercises in the Caribbean Sea are expected to take place in November or December, officials said. The deployment follows the arrival of two Russian Tu-160 nuclear bombers in Venezuela earlier this month also for exercises, an event that Venezuelan President Hugo Chavez branded a "warning" to the US "empire."

Chavez was due in Moscow this week on his third visit since June last year. "It's a warning. Russia is with us... we are strategic allies. It is a message to the empire. Venezuela is no longer poor and alone," the fiercely anti-US leader said during a public event this month after the bombers landed.