russians plan to save earth from asteroid in 2036 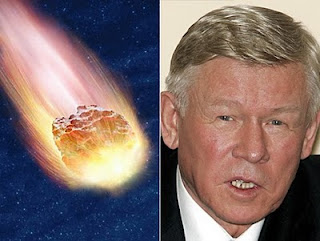 from allgov: Sounding like a character from the film Armageddon, Russia’s leading space official, Anatoly Perminov, warned this week that action must be taken to keep an asteroid from striking the earth in 2036. Perminov said “lives are at stake” unless Russia and other nations band together to destroy the asteroid Apophis which will pass near the earth. He based his warning on the findings of an unnamed scientist. However, this view contradicts the assertions of experts at NASA who estimate the chances of Apophis striking our planet at 1 in 233,000. If it did manage to hit the earth, NASA officials say it would not destroy all life, but could kill millions.