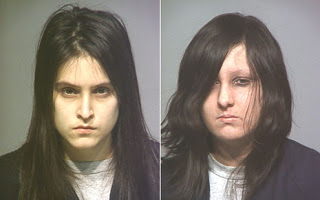 A teenage male traveled by bus from Arizona to Milwaukee, a week ago, believed lured by promise of sex to suffer an estimated 300 wounds. A Smoking Gun report characterized encounter as a Satanic sex ritual. A police search warrant issued in incident, authorized seizure of any, "...literature relating to Satanism or the occult". The Milwaukee police inventory record submitted in case, included a book discovered in a bedroom, "The Necromantic Ritual Book," by Leilah Wendell, sometimes referred to as world's best known necrophile. The book contains ritual to connect with the spiritual energy of the Angel of Death, resulting in a shared consciousness. The two women, Rebecca Chandler and Raven "Scarlett" Larabee, in latest report, have been released without charge on Friday by Milwaukee Police. It's eerily reminiscent of the release of Jeffrey Dahmer in 1991.