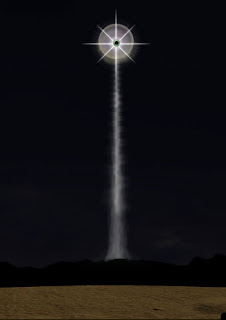 Everyone knows the nine planets of the Solar System as taught in school, but has the sky always appeared from Earth as it does today? A number of researchers believe Earth was a satellite of a brown dwarf star - Saturn - a permanent fixture in the Northern Sky, termed a polar configuration known as the Saturn theory or model. Troy McLachlan, author of Saturn Death Cult, relates his original take on theory in "the Saturn Death Cult Part I. "...Saturn, Venus and Mars, formed the heavenly abode, an abode that could only be reached via the heavenly ladder that was the giant plasma Birkeland current [pictured] that rose from Earth’s north pole, the Axis Mundi of legend.  Earth, the last in this string of planets...." McLachlan supposes Earth existed inside a plasma sheath of the brown dwarf Saturn, which blocked starlight and bathed our planet in a twilight - purple haze. The idea comes from comparative mythology, where researchers such as Immanuel Velikovsky theorize myths only make sense if Earth's sky dramatically differed from today. McLachlan believes the All-Seeing Eye and Jacob's Ladder symbolism are direct results of Earth's time as satellite of Saturn. It is when Saturn brushes up against our present Sun's heliosheath our skies changed and catastrophe (Catastrophism theory) visited Earth. The celestial changes are organized by McLachlan into Ages: Golden, Silver and Bronze and adds his view how these catastrophes impacted mankind's psychology. A fascinating read with beautiful illustrations, you may also hear entire two hour Red Ice Radio interview here and here. It's good stuff!