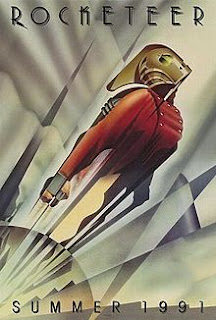 "The Rocketeer is a 1991 American period superhero adventure film produced by Walt Disney Pictures and based on the character of the same name created by comic book writer/artist Dave Stevens. Directed by Joe Johnston, the film stars Billy Campbell, Jennifer Connelly, Alan Arkin, Timothy Dalton, Paul Sorvino and Tiny Ron Taylor. Set in 1938 Los Angeles, California, The Rocketeer tells the story of stunt pilot Cliff Secord who discovers a jet pack that enables him to fly. His heroic deeds attract the attention of Howard Hughes and the FBI, as well as sadistic Nazi operatives," informs Wikipedia.  You'll like "The Rocketeer" if you have any interest in jet packs and their history.  The most successful jet pack was the Bell rocket belt developed originally by engineer Wendell Moore in the fifties and sixties, but belt and patents were sold later and tech incorporated into Tomahawk cruise missile. The production values are excellent throughout with captivating scenes such as a Nazi blimp over 1938 Los Angeles to pick up screen star-spy Neville Sinclair aka Timothy Dalton, whose performance stands out.  Tiny Ron Taylor as Lothar does add to film with an Igor-type over-sized character and Mafia muscle.  It's seamless production proves entertaining, so drop below fold to blast off with Rocketeer.  The admission ticket is free.