Only 16% now believe official fable according to New York Times/CBS News poll. How will the Bush Cabal react?

from prison planet: A monumental new scientific opinion poll has emerged which declares that only 16% of people in America now believe the official government explanation of the September 11th 2001 terror attacks.

According to the new New York Times/CBS News poll, only 16% of Americans think the government is telling the truth about 9/11 and the intelligence prior to the attacks:

The 84% figure mirrors other recent polls on the same issue. A Canadian Poll put the figure at 85%. A CNN poll had the figure at 89%. Over 80% supported the stance of Charlie Sheen when he went public with his opinions on 9/11 as an inside job.

A recent CNN poll found that the percentage of Americans who blame the Bush administration for the September 11, 2001, attacks on New York and Washington rose from almost a third to almost half over the past four years. This latest poll shows that that figure has again risen exponentially and now stands at well over three quarters of the population. 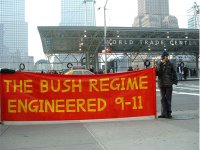 Reference to past polls show that in the last five years there has been an explosion in numbers of those who do not buy the official line.

In 2004 a Zogby Poll showed that just over half of New Yorkers believed there was a cover up.

In May of this year another Zogby poll indicated that around half of ALL Americans did not buy the official story.

The latest poll also shows a massive awakening has occurred recently given that previous estimates indicated that around 34% still believed the official story and around 30% were oblivious altogether.

Alex Jones declared that the Truth movement has cause to celebrate this evening as it is now beyond any doubt that the vast majority of Americans know that the official story of 19 Saudis with box cutters is ludicrous.

The diligence of those who have worked to educate the world on 9/11 truth from day one cannot be underestimated. We are now seeing the fruits of this hard and at times extremely trying labor hit home.

We would add that although this is a major victory for the truth movement it does not mean that the hard work can stop.

The next step is to use the majority opinion as leverage towards officially changing the record of what happened on 9/11, forcing the mainstream media into addressing the issue, not as a quirky news item, but as a serious re-defining of the state of the nation and the world today.

We have not taken the country back yet and the cabal that has taken control of the government continues to systematically use 9/11 and the war on terror as an excuse to destroy the Constitutional foundations of law and order in America. 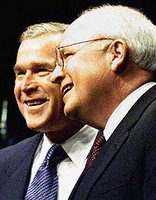 As it becomes clearer that more and more Americans KNOW that their government is lying to them on the most fundamental issue of their lifetimes, we must consider what kind of reaction the government will undertake.

Remember that the majority of American voters now believe that 9/11 was a more significant historical event than the Japanese attack on Pearl Harbor.

In July 2001, Alex Jones issued an emergency warning that there was going to be a massive false flag terrorist attack in New York to be blamed on Osama Bin Laden. At that time there was not enough activism among the population to prevent it going ahead.

In August of 2006 Alex Jones issued a second emergency warning that all the factors pointed towards an imminent attack. The activism that occurred in the wake of this warning and that of others was exponential and may indeed have helped stave off another attack.

Our next warning is this, desperate times call for desperate measures. The criminal elements of the government now know that they have been totally exposed and are reviled by the majority of free thinking Americans. Will their response be to vamp up the crack down on that free thinking itself?

In essence Americans have outright REJECTED giving up their liberty for security in the wake of 9/11. The only security IS liberty itself, and the only way to stay secure is to constantly defend liberty.